Two years on, under the guidance of the FUKUS Axis (France, UK, US) terrorists, Libya continues to live a nightmare of chaos sown by these demonic hordes, entering villages to murder, commit ethnic cleansing, rape, torture, steal and install regimes of terror in local communities formerly living together in peace. 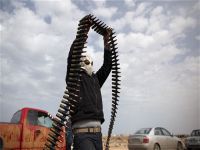 One of NATO's "defenceless civilians"

A fitting political legacy for Messrs. Obama, Cameron and Hollande, also Hillary Clinton, William Hague and Laurent Fabius in 2012 is the fact that two years on, there are Libyans risking their lives getting the truth out, telling the outside world about what is really going on in the country formerly (under al-Qadhafi) with the highest development rates and living standards in Africa.

And what is going on is utterly shocking. Development rates and standard of living indices have plummeted, to the extent that there is no available data. The lies spun by NATO in general and the FUKUS trio in particular over the casus belli in Libya are now famous: al-Qadhafi was not killing his own people, he was not bombing his own people, he was desperately trying to fight against Al-Qaeda which the United States of America, the United Kingdom and France let back into Libya.

The heroic Green Resistance formed among the loyalists to Muammar al-Qadhafi, standing up for the Jamahiriya system of government which saw local communities solve their own problems asking the central Government to provide for their needs, standing up for the communities trying to fight against the foreign-backed terrorist scourge which has plagued Libyan villages, towns and cities. The Green Resistance today fights against these murderers, rapists and thieves, fights against the FUKUS intervention in Libya, engendered to steal Libya's money and resources and the members of the Green resistance risk their lives to bring us the truth.

The least we can do is spread the word. And the word, in December 2012, is this: a terrorist leader Mankoosh was seized in Morocco at the beginning of December (he dared not even stay in Libya) and he is supposed to have been exterminated; the terrorist leader Bahr Addin es-Sulimani has allegedly been liquidated by Green Resistance fighters in the southern city of Sebha.

Refugees (black Libyans, ethnically cleansed by NATO-backed terrorists) from Taverga were massacred by FUKUS supported murderers in Tripoli. Many such incidents have taken place over the past year and a half and not one word from Obama, Cameron or Hollande, Clinton, Hague or Fabius. After all, there is nothing for them to say or do except hang their heads in shame. But they are too arrogant even to do so. Their "freedom delivery" in Libya has to be judged by the consequences of their idiotic, criminal and murderous policy, and it shall be... it shall be.

Many Libyan citizens have been freed from concentration and rape and torture camps manned by the FUKUS Axis terrorists. Many Libyan citizens kidnapped by the FUKUS terrorist filth had their organs removed, often (almost always) without anaesthetic; women and children were held as sex slaves and many were sold off to brothels abroad. It is obvious that the Libyan "rebels" were the dregs of society, common criminals aided and abetted by the USA, UK and France, given guns and a carte blanche to perpetrate their fantasies on law-abiding citizens. We now put the recent document alleging that Saudi Arabia has released the dregs from its mental hospitals and prisons into Syria, elements backed by the same (who else?) FUKUS Axis into this context.

Read "Syria" into "Libya". A group of some 50 terrorists were exterminated over Christmas on the border with Chad; the Green Resistance informs that the entire herd of this filth was liquidated, not one of them survived to infest other areas of Libya. Some sources claim that once more there were western elements or elements from the Gulf Cooperation Council (Qatar, Saudi Arabia and other friends of the FUKUS Axis in the Middle East doing its dirty work against other Arabs) among the terrorist scourge.