If the Mayan Prophecy was right, namely the end of a cycle and the beginning of another, then the resolution of the General Assembly of the United Nations on December 21 calling for the end of female genital mutilation, augurs well, although there are cross-cultural issues involved in the debate. 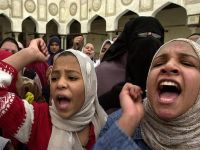 I personally have been accused, by an African woman, of cultural imperialism for having spoken out against female genital mutilation some 20 years ago, as I was also accused by an Afghan woman, for speaking out against the Burqah. "You do not have the right to decide how I present myself for my husband," she said. And I agree. I have never again entered the fray of Moslem head gear for women.

But with female genital mutilation, I disagree, because it is an intrusive practice carried out normally against minors, who do not have the right to decide whether or not the act is performed. And the act is the removal of the clitoris, often in extremely insanitary conditions, so that the future woman will not enjoy the sexual act, being denied an orgasm, "so that she will not play around".

The UNO has linked FGM (Female Genital Mutilation) to the theme Violence against Women, and rightly. According to the World Health Organization, up to 140 million women worldwide live with this scourge, described by the UO as follows:

Millions of girls are subjected to this barbaric practice across north Africa, the Middle East and Asia every year. Despite the fact that this author and many others have spent decades campaigning against FGM, it has taken ages to get some action from the UNO and let us now monitor the progress on the ground.

One thing is the General Assembly making a statement, another is tangible evidence that FGM is being effectively eradicated. Let us now monitor the progress in the field, let us apply pressure on the authorities of those countries where this horrific act is carried out and let is surf this wave of righteousness.

Ethics before economics... let's do this.