Why Americans cannot discipline their children 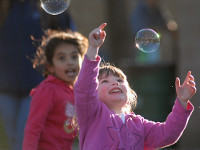 from barbarism to degeneration without the usual interval of civilization.

The ultimate reason that Americans are unable to discipline their children is that they have no authority over them. The American state, together with private industry, especially the "helping professions," have usurped their authority in loco parentis, thus empowering physicians, psychologists, judges, social workers, dentists and other health workers by, in effect, reducing people to parental incompetence. American children run amuck, throw tantrums in the "terrible twos" and "fearsome fours," and commit indignities against their parents and maliciously disobey them such as to shock the rest of the world. A Eda Leshan in 1985 published a book called When Your Child Drives You Crazy. Children's actual socialization comes from the ever-present baby sitter, television, and the school, neighborhood pals and their interaction at play.

American parents are reduced to their entertainers, meal tickets and gift givers; in the U.S. the glorification of consumption and the warfare of status materialism see the parents constantly showering their "kids" with presents, all too often in place of true love and affection. The mother resorts to shrewishness and constant nagging to obtain minimal obedience from her children, while the deadbeat American husband and father has emotionally abandoned the family and takes little part in family life. A 1971 study by college psychologists of fathers in the Boston area found that they spent a grand total of 37 seconds a day on average spending time with their infants. Parents do not guide, comfort, govern, teach, nurse, control, restrain or mentor their children, although they are fond of giving them a good teasing now and then.

Sadly, the author has observed thousands of times children crying and reaching out in misery and just begging for comfort and reassurance from their parents, who stand there helplessly as if paralyzed or moronic as to what to do, or they insensitively without any insight scold their offspring for being "cry babies." The bewildered parents simply do not know what to do, and the surfeit of advice from so-called experts, which has increased exponentially since 1945, has ameliorated the problem not at all; mothers who diligently study Chilton-like manuals to learn "maternal instinct" still are incompetent, and the malaise has only intensified after that year.

Permissive child rearing, the way Americans raise their children, may seem to be an issue championed and criticized by conservatives. James Dobson, a conservative, wrote the bestseller Dare to Discipline, the chief virtue of which may lie in the sensible message of its title. The Duke of Windsor (King Edward Vlll), notably remarked in 1957, "the thing that impresses me most about America is the way parents obey their children." But actually criticism of and effective action against permissive child rearing ought to be a cause of radicalism.

One of the best exposes of the American parental malaise to my knowledge is Christopher Lasch's 1979 book The Culture of Narcissism; Lasch was a radical. The book is a modern classic and hardly obsolete, despite having been published that long ago, one indication of which is that it is still in print. Lasch traced the history of parental permissiveness in the chapter "The socialization of reproduction and the collapse of authority." He observed that "the devaluation of parenthood coincides with a belated movement to return to the family functions it has surrendered to the apparatus of organized therapy and tuition.... Welfare agencies furnish a poor substitute for the family." Lasch referred to "the proletarianization of parenthood," the American mother's "striking lack of affect," and parents who try to "keep up with the kids" instead of training and disciplining them. "The 'transfer of functions,' as it is known in the antiseptic jargon of the social sciences-in reality the deterioration of child care-has been at work for a long time...."

Permissive child rearing abets the political status quo by producing people of political reaction who are insecure, anxious, conformist, competitive and status-conscious; it hence is an integral part of social control, a fact the right-wing critique does not realize. The helping professions, which as Lasch noted did so much, beginning about 1880 and gaining ascendance during the Progressive Era, to promote  parental incompetence, acted under the hegemony of American ideology, which is that any man can become rich.

The world owes the universal acknowledgment of the concept of ideology to Marx, who popularized it as a revolutionary and political philosopher as the rationale and justification of the class in power and sub rosa of its culpable wrongs and injustice. Even to people hostile to the rest of Marxism, ideology is a standard concept. American ideology demands that people view opportunity as open to everyone, all the people, which in turn has the elite feigning democratic lack of class privilege, and that idea has evolved over the centuries to mean that each generation of Americans should allow their children to learn societal norms, from society in general and not from their parents.

Mothers and fathers acquired a hands-off or laissez-faire creed regarding their children, while for its part the ruling elite did not rub in against the have-nots its wealth and position, assumed an anti-ideological ideology and even came to raise its own privileged children in accordance with the pattern of the lower classes. The American ideology of wealth dates from early American history, roughly 1650, and no one foresaw its secondary effect on the family-not the ruling class, or the "Founding Fathers," or the intellectuals and illuminati, or Tocqueville. Permissive child rearing, hardly part of a conspiracy, came into being willy-nilly, a result of purposeless historical forces, unplanned, nondivined, unenvisaged and nonteleological.

Fleming is the author of the book Word Power, which can be purchased through Amazon.com.