In its economic report for 2013, the UNO states that the pace of growth it estimates for the coming two years will not be enough to address the jobs crisis. The report is a condemnation of the approach to the economic crisis following the market-oriented liberalism preached by western countries. Does it indicate that a depression is looming? 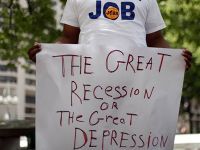 The United Nations is clear in its economic report The World Economic Situation and Prospects 2013, stating that the pace of growth it estimates for the coming two years will not be enough to address the jobs crisis. The report is a condemnation of the puerile approach to the economic crisis following the market-oriented liberalism preached by western countries. Does it indicate that a depression is looming?

It's the system, stupid!

The causes of this are very simple: it's the system, stupid. Let us see why. (Place the CD, orchestral music in the background). It was about freedom. Freedom to start your business, see it grow, to reward those with two ideas and some endeavor, employing people and in this way contributing to the economy. They said it was better than the alternative system, the controlled economy, which pooled resources, shared them and distributed wealth by creating opportunity through an excellent education system, giving the same tools to all citizens, providing them with the options to use in a meritocracy.

This system included free universal education from primary to higher education levels, free and guaranteed housing, a guaranteed job, free and excellent healthcare and basic necessities like public utilities, staple foodstuffs, subsidized communications, transportation and an indexed retirement pension. The system also internationalized itself, providing the same benefits to millions of people across the globe which it freed from the evils of imperialism.

While all this was going on, what was the liberal, market-based economy doing? Why, it was spending trillions on sabotaging the controlled economic model, trying to assassinate its leaders and entering into an arms race, infiltrating its societies with agents provocateurs and saboteurs, then they complained about paranoia with security and after isolating the countries with trade embargoes (such as they did with Cuba) they had the audacity to say the alternative system did not work, without ever mentioning that despite the inhuman blockade, Cuba, for instance, has done a tremendous amount of work in international development programs in the areas of medicine and education, while the Soviet Union was spending 270 billion USD a year on development programs overseas.

Development projects, building roads, schools and hospitals, not killing people, as the west was doing.

Is that all? No, the western model was doing much more than spending trillions on sabotage and murder, it was also overspending, investing its funds in pie-in-the-sky products, basically gambling their citizens' welfare away on future prices of aluminium and so on and so forth, then having the audacity to say the market-oriented system is better and the controlled system doesn't work.

Better, how? What happened to the butcher, the baker and the grocer? Where are their stores? Swallowed up by the Big Space, that horrid commercial monster with torrid lighting and polished floors where the customer is manipulated from the second (s)he enters the store to the second (s)he leaves, using smells, images, positioning.

The casino economy rules...for the criminals controlling it. Will they ever go to jail?

So welcome to the wonderful world in 2012. This is the first of a series of articles, for posterity. Those who like the approach, please make them go viral, for in the future we will all be judged as to what we are doing to combat the evil in our management systems.

Conclusion: the current western-based economic model does not work. Period.