When Money speaks louder than life

World Malaria Report 2012 presents some shameful information: a lack of funding is threatening to undermine the headway gained against Malaria which in 2010 claimed the lives of 660,000 children. This, in a world in which more and more money is being spent on weapons and on undermining sovereign states using terrorists. 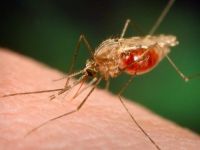 And welcome ladies and gentlemen to our wonderful world in 2012, one in which the FUKUS Axis (France, UK and US) with their sickening demonic sycophantic allies crawling round their legs are currently engaged in undermining Syria using their special forces (with Turks and Qataris) in liaison with terrorists murdering civilians and security forces alike.

And in this wonderful world in which billions of dollars are being spent on weapons and on undermining sovereign states, it comes as no surprise that the latest edition of the World Malaria Report (2012) from the World Health Organization makes a shocking revelation: "A significant slowdown in global funding of anti-malaria campaigns threatens to roll back impressive gains made against the preventable mosquito-borne disease over the last decade".

The report goes on to claim that funding to prevent and control Malaria began to level off between 2012 and 2012, "a slowdown that could threaten to reverse the remarkable recent gains in the fight against one of the world's leading infectious killers," states the report.

In 2010 there were 219 million cases of Malaria reported, resulting in the death of 660,000 people, mostly children aged under five. Ray Chambers, the UN Secretary-General's Special Envoy for Malaria warns of a "humanitarian crisis".

"Millions of children can be saved in the coming years with methods that have already proven their success, yet we will lose this chance if funds are not mobilized immediately," he stated.

Great progress was made after the public-private initiative backed by the UNO Global Fund to Fight Aids, Tuberculosis and Malaria was launched in 2002, which provided over five billion USD with generous donations from the USA, UK, World Bank and UNITAID, among others.

The USA and UK, of course, now have other priorities on their agenda. As we saw in Libya, using terrorists to destabilize a Government and destroy a State because of oil and now, a geo-political adventure leading the world closer to a devastating war in Syria. As usual, we see where the real priorities lie.