As if the murder of 20,000 civilians and security forces was not enough, the terrorist scourge inflicting itself upon Syrian society, raping women, torturing, beheading, looting, torching, murdering journalists, is also wantonly destroying the country's singular and unique cultural heritage. 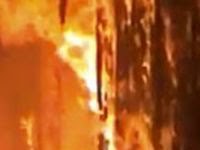 In cultural terms, Syria, home to the Ancient Assyrians, is a jewel. Its cities are the oldest continuously inhabited cities in the world, its culture stretches back seven thousand years. The ancient languages Maalua, Aramaic, and Syriac are still spoken in some areas, the many peoples and religious groups have until now lived together in peace.

Enter front stage the British duo David Cameron and William Hague, the French (wannabe Napoleons who have suddenly discovered it is cool to crawl round the legs of their Anglo-Saxon masters) and the (who else?) Americans, Barack Obama and his sinister little side-kick, Hillary War Zone Clinton. What is the result?

As we saw in Libya, chaos and terrorism, sown by the FUKUS Trio (France, UK, US) and the donkeys it rides in the Middle East, bedpals Qatar and Saudi Arabia. As we saw in Libya, little girls were raped, household pets were pulled apart or shot or burnt, boys were tortured, men were butchered, women had their breasts sliced off, ethnic cleansing was practised against black Libyans who had their throats slit, properties were torched and looted, people were tortured and dismembered as NATO's darlings once again engaged in organs trafficking.

And now in Syria, quite apart from the disgusting behaviour of the FUKUS-backed terrorists, perpetrating the same evils, we have wholesale and wanton desecration of Syria's unique historical and cultural heritage by this western-backed filth, much of it non-Syrian. Irina Bokova, the Director-General of UNESCO, has said that she is "devastated" at what is going on, especially in Aleppo, where the ancient network of market-places in some areas has been reduced to rubble by groups of terrorists.

Groups of armed thugs have also engaged in looting and smuggling priceless ancient statues, and bearded maniacs have been scrawling obscenities and graffiti on the walls of Ancient Greek and Roman temples. This filth has also been accused of attacking fortresses dating back hundreds and thousands of years and trying to destroy their masonry.

Those directly responsible are those countries and agencies backing these terrorists. It is illegal, it goes against every single document, treaty, agreement and covenant in international law and it is as inhumane as it is totally indecent and unacceptable.

Yet in this day and age the leaders of the FUKUS Axis seem free to do what they like, break the laws they wish to break and walk around freely as if nothing had happened. Kind of a telling statement on what humankind has become.