The Human Cost of Western Fundamentalism

"We bombed Hiroshima, we bombed Nagasaki, and we nuked far more than the thousands in New York and the Pentagon, and we never batted an eye.

We have supported state terrorism against the Palestinians and black South Africans, and now we are indignant because the stuff we have done overseas is now brought right back to our own front yards.

As the virulently anti-Islam, anti-immigration Dutch politician, Geert Wilders, sought re-election in Wednesday's (the 12th of September) polling in the Netherlands, light has been thrown on the links of his less than transparent parliamentary party.

A detailed article (i) has pointed out, "Wilder's  Party is self-funded ..." thus absolving the need to disclose donors, as is mandatory for the mainstream, government funded parties.

Wilders, who joined the Dutch Parliament in 2006, having campaigned from an anti-Islam platform, had a twenty-four member party in the one hundred and fifty seat lower house.  However, they lost eleven in yesterday's poll. His MPs stand against mosque construction, headscarves and non-Western immigration.Tolerance and outreach is a distant planet, with Wilders having declared he would not enter a mosque: "... in a hundred thousand years."

Anders Breivik, who killed seventy-seven people in Norway in July last year, and was last month sentenced to an initial twenty-one years in jail, quoted Wilders in "an online manifesto that sought to justify his crimes," the article reminds.

It transpires that in a legal case brought against Wilders in 2010, regarding his film "Fitna" (broadly, translated as: upheaval, chaos, creating discord) "which interlays images of terrorist attacks with a quotation from the Qu'ran," legal fees were paid by The Middle East Forum, a US based "pro-Israeli think tank."

The Middle East Forum (ii) was founded in1990, by Daniel Pipes (iii) "To promote American interests in the Middle East." The Forum views the region as one of, "radical ideologies ...violence and weapons of mass destruction as a major source of problems for the United States ..." (emphasis mine) Ironically only Israel is proven to have weapons of mass destruction and in seemingly copious quantities.

The Middle East Forum aims to protect the: "freedom of speech of anti-Muslim authors promoting American interests in the Middle East" and of course, protect it,  "... from Middle East threats."

"Islam is the Trojan Horse in Europe. If we do not stop Islamification , 'Eurabia' and 'Netherabia' will just be a matter of time," Wilders told the Netherlands Parliament.

Another supporter of Wilders is Los Angeles based David Horowitz, whose organization is the David Horowitz Freedom Centre ("freedom" is surely becoming the word from Hell) "dedicated to the defense of free societies whose moral, cultural and economic foundations are under attack by leftist and Islamic enemies at home and abroad."  Horowitz has also founded an Israeli Security Project (iv.)

"Horowitz agreed with the Dutchman's repeated and public comparison of the Qu'ran with Hitler's Menin Kampf," regarding comparing the two works as a: "fair analogy."

Pamela Geller, who runs Stop Islamization of America, is also cited as a supporter, though denies she gives Wilders any funding.

Described as deprived of a personal life as a result of his hatred of Islam, with no privacy and 24 hour guards (paid for by the Dutch tax payer), Wilders states that nowhere has he had, "that special feeling of solidarity that I always get when I arrive at Ben Gurion International Airport," which he records he has arrived at forty times in the last twenty-five years. (v)

This solidarity has led him to call for Jordan to be renamed Palestine, for Palestinians to return there and for the Dutch government to refer to Jordan as Palestine and move their Embassy in Amman to Jerusalem. Further, he has stated, "If Jerusalem falls into the hands of the Muslims, Athens and Rome will be next. Thus, Jerusalem is the main front protecting the West. It is not a conflict over territory, but rather an ideological battle, between the mentality of the liberated West and the ideology of Islamic barbarism."  Jerusalem's millennia of guardianship by regionally rooted Muslims, Christians and Jews, predominantly, seems to have escaped him.

Between the all, what a meeting of minds.

Daniel Pipes et al., it seems, cast a long shadow. As Max Blumenthal has written the identity of "Sam Bacile," seemingly the creator of the filth- ridden anti-Muslim film which may have contributed to the death of US Ambassador Chris Stevens, with three colleagues and ten members of a Libyan security detail in Benghazi on the 11th of September, a "consultant" to the project, is known.

He " ... has been publicly listed as a consultant on the film, is a known anti-Muslim activist with ties to the extreme Christian right and the militia movement. He is Steve Klein, a Hemet, California-based insurance salesman who claims to have led a 'hunter-killer team' in Vietnam."

"Klein is a right-wing extremist who emerged from (the mindset) that produced Anders Behring Breivik, and which takes inspiration from the writings of Robert Spencer, Pamela Geller, and Daniel Pipes."(vii.)

Pipes has also virulently denied having had any influence in the publishing of the "cartoons" of the Prophet Muhammad in the Danish newspaper Jyllands-Posten. However he confirms on his website that an Editor responsible for their commission, Flemming Rose, interviewed him in Philadelphia on the 25th of October 2004. The result was an article, "The Threat of Islam" in the paper on the 29th of October. The twelve cartoons appeared late in 2005.

President Obama, after the death of Ambassador Stevens and colleagues (the ten Libyan staff seemingly passed him by) stated that he rejects denigration of religious belief.  Perhaps a place to start denigration's halt would be the home-grown in the Western, Crusading, fundamentalist Christian-Zionist alliance. From Wilders to Pipes. 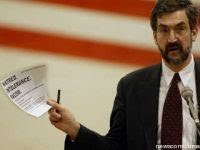