Two main human rights issues have been outlined by the United Nations Organization's Human Rights Council in Geneva, in a report delivered by the Special Rapporteur James Anaya. One comes partly from within - gender violence - and the other comes from outside: the unregulated extraction of natural resources by corporations. 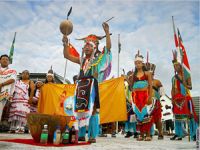 Despite the collective efforts of western countries over the centuries, what with massacres, with slavery, with extermination programmes, paying trappers and hunters per the scalps they took, with thievery, looting and wanton interference and violence in the affairs of sovereign nations and peoples, there are still today around 370 million indigenous people worldwide.

The report from James Anaya was delivered after a meeting of the UN Permanent Forum on Indigenous Issues, which met in May this year, involving around 2,000 indigenous representatives. For the Special Rapporteur, the main questions affecting the indigenous peoples are violence against women and girls both from the indigenous men themselves and outsiders and the indiscriminate extraction of natural resources from the areas where they live, occasioning environmental damage, destruction of habitat and constituting an affront against self-determination and cultural heritage.

James Anaya recommends that "Indigenous self-determination and cultural integrity must be enhanced, along with efforts that are designed to prevent and punish violence against indigenous women and girls". For this, the terms and conditions laid out under the Declaration on the Rights of Indigenous Peoples (*) would serve to create the holistic approach many call for to address the violence issue.

In this, the collective and individual rights of indigenous peoples are set out; the document covers areas such as cultural identity, linguistic issues, rights to employment and healthcare, education and integration of communities.

For James Anaya the approach should focus first on the primary, basic human rights of indigenous peoples as members of the international community. This includes the principle of inviolability of the person and also involves the rights of peoples to a habitat, in which case the extraction of natural resources is called into question.

The point is who do these resources belong to? If the indigenous peoples have the rights to live on ancestral lands, then surely they have the rights to the commodities found on and under them, quite apart from principles of self-determination.

In future, it is hoped, greater focus will be placed on extracting processes by corporations which are often allowed to operate with a minimum of control by the Governments or States and virtually no input from the peoples whose territories are being devastated. Gone are the times of neo-colonialism and imperialism. Or are they?