Peaceful, popular, powerful. Portugal explodes in fury against the Government, the Troika and their disgusting policies which have taken away the opportunities of an entire generation, which have impoverished the entire Portuguese people, which have left pensioners destitute. The seething fury on the streets of Lisbon is tangible. 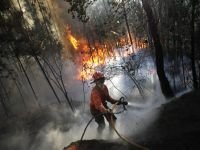 Many hundreds of thousands of people, some say one million, took to the streets today in Portugal. That would be 30,000,000 strong in the United States. Some demonstration, and for some reason it must have been... In Aveiro, a young man tried to set fire to himself. Nice one, Prime Minister Pedro Coelho.

The Prime Minister, Pedro Coelho, has lost the country - hardly surprising because it is the constant value in the equation of a PSD government and social rupture usually takes place two years into the mandate. Pedro Coelho managed it after just one. Nothing surprising really, the PSD was always the party crawling up the legs of its masters in Europe, trying to be a "good student" and receiving pats on the back every time it followed orders.

Services? Yes, services. A country of waiters. "Oi! Diego, bring me another 'facking' beer!" Yessir! Sorry sir. "Oi, you! Why is the fish here different from what it is back home?" Sorry sir, we'll try and make it the same as the rest of Europe. Sorry it tastes different.

Exactly. Subservience, and servility. This is the legacy of a year of PSD government as yet again Portugal kowtows to Europe's orders. This time it is even worse, the IMF is involved and when that happens, you are regally screwed. The impositions they have made on Portugal are inhuman and inhumane. Does the PSD care? Does the Prime Minister care? Does the Government care?

The Prime Minister and the Government, and most of the members of the Portuguese parliament, excepting those belonging to the only two groups which have never had a chance to govern, namely the CDU (Communists and Greens coalition) and the Left Block, have no idea whatsoever what it is like to be and live as a Portuguese.

They have no idea what it is like to live on a miserable pension of a few hundred Euro and have to pay soaring costs of medicines. In pharmacies, the job of many pharmacists is to help the pensioners choose which of the list of medicines they sell because they cannot afford the rest.

They have no idea what it is like to see an elderly gentleman, who once had a dignified position, and in the Portuguese State, crying in the street with pain, saying "I have a very small pension, this Government is STEALING it from me, I have terrible pain and I cannot afford the treatment".

They have no idea what it is like to have to work from sunrise to sunset in the countryside, digging, weeding and planting, back bent, spine curved, six days a week, to eke out a living because the pension disappears on the electricity and gas bills.

Anyone who has ever lived in Portugal knows this. Public administration in Portugal, from the national level to the regional level to the local level, with rare exceptions, is staffed by a bunch of traitors who see public service as a way to feather their own nests and whose interest in the people is mirrored by a derisory sniff as they chortle around meal tables about how horrid it is to go shaking hands with the public (dar os bacalhaus, in Portuguese).

If this were not the case, then why did they sell off Portugal's assets in return for a pat on the back like servile dogs, why did they destroy the jobs for the children of Portugal downstream, why did them impose the EURO on Portugal and do nothing while prices doubled and tripled, why do they insist on policies of low wages and high prices, why have they not indexed prices of utilities and transportation, why have they not given the elderly the proper reward for their years of dedication?

Because collectively, they are a bunch of.....and deserve... May the readers fill in the spaces.

Having said which, the Portuguese people are too dignified for that. The writer and poet Miguel Torga said: "It is a strange phenomenon, the country rises up in indignation, the people moan around all day in indignation, they eat, drink and have fun in indignation but that's it. What's missing is the civic romanticism of aggression. Socially, we are a pacific collective entity of revolted people".

The Portuguese people will not, and should not, rise up in violence. What they should do however is to take note of the governments in power in the last four decades and make sure they never, ever get back in. What they should do is set up a civic platform which has access to public finances and vets them with a very fine comb, making sure nobody or nothing from the State has any part in it, and make all offices of Government totally transparent.

What they should do is to set up a new Justice Department, investigate ALL those in all positions of government from national to local level since 1974, summarily try those who are suspected of criminal activity, if guilty strip them of all their possessions, throw them into jail - like a common prisoner, not one of those privileged jails for toffs and lawyers - and set up a Justice Ministry which people can be proud of. You break the law, you pay the consequences.

What they should do is clear out the lobbies which block the country, clear out the crap that infests Parliament and replace it with patriots, implement policies which force the banks to do what they are supposed to do, or else nationalise them, respect the pensioners, respect the people in the countryside and respect the youth, not to mention the middle class which with every government that enters power, drops down a notch or three into abject and endemic poverty.

What they should do is tell the Troika to leave as soon as possible, to examine where Portugal's space and future is and to question whether it is in THIS European Onion, ugly on the outside and stinking within.

Author's note: Before anyone starts questioning whether this piece was written by a Portuguese or a foreigner, the author lived in Portugal for several decades, has three children who are Portuguese, is partly Portuguese himself and retains a tremendous respect and love for the country and its people.