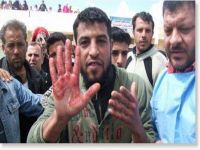 The Russian Foreign Minister, Sergei Lavrov, said today in a statement carried on the Foreign Ministry website that "Our Western partners have not done anything to influence the opposition and convince it to start dialogue with the authorities. They are openly encouraging the opposition to continue armed resistance instead. It is clear that these methods will not help in finding a political solution to the crisis."

Well said, Mr. Lavrov. Vladimir Putin's Russia is, and has always been, the champion of upholding international law, fostering dialogue over deployment, involving all parties in a process instead of refusing to talk to key players, and fundamentally, respecting the UN Charter, the principles of legal covenants and agreements and not engaging in wars to satisfy Washington's lobbies which in turn control NATO.

In fact, one may say that things would be totally different if Russia controlled the UNO as NATO so obviously does these days (where for instance have we seen a NATO war criminal or western political figure entering the doors of the International Criminal Court for war crimes? There have been plenty of cases, as outlined in this column over the last 13 years).

Iraq would not be in the turmoil it is, Libya would be a de facto unitary state, the people would be receiving free housing, free education, free healthcare, cars, land, seeds, agricultural equipment; Africa would be enjoying its own facilities instead of having to yet again pay western corporations massive sums for use of resources; Syria would be at peace, the Middle East situation would probably have been solved, definitively.

But how can there be peace anywhere when Washington uses NATO and its member states to implement policies favourable to the lobbies surrounding the White House? True, this makes NATO not only unconstitutional in most countries but also raises the sycophantic kowtowing of NATO member governments to the level of treason.

How can there be peace when the West runs screaming when it is the victim of terrorist attacks but then spends its time sponsoring, arming, financing and training terrorists and refuses to accept responsibility for the shocking crimes they commit overseas?

More and more we see the Russian Federation as a bastion of right and reason and the west, collectively, as a collection of pariahs in the international community. They should be ashamed of themselves but then again, would Satan be ashamed of being evil?