The World Health Organization has praised Australia's lead in presenting cigarettes for sale to the public in plain olive-green packaging without brand names and with photographs of diseases caused by smoking. Is this the right measure? 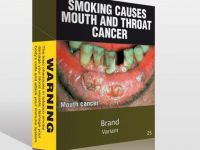 In the equation which constitutes the human being, habits and addictions are a constant factor. As we turn back the pages of the history book, we see that alcohol, herbs and leaves, even cobwebs, have been used for thousands of years for their medicinal effects or as a mind experience as the user experienced their effects.

Tobacco, the focus of this article, started its life in the Americas around 6,000 BC and after introduction to Europe after Christopher Columbus' expeditions was widely used as a medicinal cure-all. Gradually, people began to realise that it had side effects; as early as 1610, Sir Francis Bacon noted how addictive it was and from the 1820s, a growing number of scientists wrote papers about its poisonous qualities.

Today, we know that smoking tobacco is a health risk but it is also an extremely lucrative business which rakes in billions in taxes for the Governments of all the countries in the world and makes the tobacco industry around 100 billion USD per year in revenue. The decision by the Australian High Court to dismiss a legal challenge from the tobacco industry against the plain packaging of cigarettes has been praised by the WHO, which calls on all countries to take up Australia's lead.

Certainly this is one approach and maybe one worth experimenting with, as a means to reduce the consumption of tobacco, but then again if it is so dangerous, why isn't it banned? Or is the argument that if you only smoke three cigarettes a day you are relatively safe, as safe as the drinker who consumes his three units per day given that there is no genetic propensity to health issues connected with alterations in proteins and so on?

In which case, what about the food industry? Has it not been proved that if you eat junk food all the time, you are more likely to die faster than a heavy smoker? And how much of the produce we buy in the supermarket is charged with chemicals? Have the effects of these been researched? What about GM products? Has the research on the effects of these in foodstuffs and the knock-on effects been properly divulged?

True, ban tobacco and you create another black market from which criminals will thrive, pushing it underground and sending armies of pushers and traffickers and smugglers out into society, swelling our prison populations to breaking point. Or beyond. Placing pictures of diseased gums is certainly more graphic than a health warning, but what is more graphic than "Smoking kills"?

The quandary is, the more successful this campaign becomes, the more likely it is that another industry will spring up, namely that of packaging cigarettes in an attractive manner.

The hypocrisy behind allowing a dangerous substance to be sold while at the same time imposing taxes on it seems paramount to secretly hoping more and more people start smoking so that they can pay the bills of their friends and families in hospital.

Research by the European Drugs Observatory reveals that what changes consumer habits more than anything else is not campaigns or awareness programmes, it is the supply dictated by the market itself. So, if the consumer is the pawn in the game, led around a hypermarket by a careful placing of products on shelves, by smells and by a manipulation of the rhythm of the background music, and if habits and addictions are a constant factor in the human equation, it remains to be seen how effective plain packaging will be.

Author's note: As a person who smoked three packs of cigarettes a day for twenty-one years and who gave up smoking nearly two decades ago, if my experience helps anyone, it is easy to give up once you have worked it out in your mind and once you realise that the longer you consume tobacco over twenty years, the more likely you are to do permanent damage, and the sooner you stop, the less likely you are for that damage to turn nasty.

Waking up feeling great instead of coughing and retching, tasting food and enjoying a coffee or a drink without contaminating it and the air around me, being able to go out without planning the route to include a tobacco outlet when I was low on cigarettes have greatly improved my quality of life. When I gave up smoking, I gained a new freedom.