The World Health Organization has released a report stating that Syria is facing critical shortages of medicines and pharmaceutical products. Since this was not the case before the scourge backed by the FUKUS Axis (France, UK, US) and its GCC (Gulf Cooperation Council), it is clear where the responsibility lies. 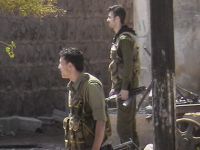 What to expect of the same groups - FUKUS and the GCC - in Syria, where they have done exactly the same thing?

One of the results is clear for all to see. As their terrorist scourge, which is composed largely of 65,000 foreign, I repeat, FOREIGN, mercenaries, including many Libyans, lots of misfits from the GCC, Turks and of course FUKUS Axis operationals - paid cowards - is chased screaming out of Damascus and is surrounded in Aleppo, being confined to running around the countryside where its supply lines are being slashed daily and where its foreign masters are being caught, the tangible contribution they have made to Syria is visible.

This contribution to date has been death, destruction, the murder of Government authorities and security personnel in terrorist attacks with the connivance of the FUKUS/GCC Axis and now, a growing healthcare disaster. One imagines how they will pin this one on President Assad, himself a doctor who swore the Hippocratic oath to save lives, precisely what he is trying to do by defending his people against the western-backed terrorist filth.

Tarik Jasarevic, spokesperson for the WHO, declares "The recent escalation of clashes had resulted in substantial damages to the pharmaceutical plants located in rural Aleppo, Homs and Rural Damascus, where 90 per cent of the country's plants were located. Many of these plants had now closed down, thus resulting in a critical shortage of medicines."

Before this western-backed terrorist filth was unleashed upon Syria, the country produced 90 per cent of its own medicines. Once again, we see the hand of the lobbies which dictate policy around the White House and its poodle states at play, and they call this democracy.

"Democracy" for them is starting colour revolutions in sovereign nations whose geo-strategic position you envy or whose resources you covet, democracy is using terrorists to fulfil your goals, democracy is imposing a "Government" from the fringes of society after a colonialist meeting in a London Hotel and democracy is imposing a nice squeaky-clean western governmental package wherein you get to be ruled by a minority government, or whereby a government with 30% of the vote and the support of 23% of the population gets to impose its solutions to satisfy the cliques which have meanwhile closed around it. "Yes I know that was in your Manifesto but you aren't going to do it".

A true form of Democracy was the Libyan Arab Jamahiriya, but then again those who understood what that was had to destroy it. In today's world, some democrats are less democratic than others. In today's world, people have been duped into voting for this farce, believing they are living in a democracy and not in a corporatist elitist society run by lobbies and cliques, which dictate economic and foreign policy. How democratic is NATO? Did anyone vote for it?

And then they have the cheek and the sheer, barefaced arrogance to label others who fight against terrorists "dictators". It seems that certain countries never learn...