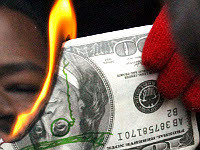 Economic/financial systems dependent on wars and predation eventually self-destruct. Western capitalism is no exception. Money power runs things. War profiteering is policy. Ordinary people have no say. Exploiting them for profit is prioritized. Divisions between rich and poor grow. By some measures they're unprecedented. Money power in private hands and democracy can't co-exist. Banking giants transformed Western societies into vehicles for wealth extraction. Corrupt politicians facilitate their criminality. In return, they're rewarded handsomely.

Paul Craig Roberts wrote about "The Collapsing US Economy and the End of the World." Can societies survive Washington's hubris, he asked?

Federal policy destroys people politically, militarily and economically. Few benefit at the expense of most others. Washington grows more "isolated and despised." Europe "is on the ropes" and sinking. Wars rage endlessly. Victories are elusive. Options perhaps are down to "the elimination of life on earth. Is this Washington's program," asked Roberts.

Former Secretary of State Madeleine Albright once said what good are nuclear weapons if you don't use them. Roberts quoted neocon warmonger Bill Kristol saying the same thing. Formerly he served as vice president Dan Quale's chief of staff. He's now a Fox News regular. He and others like him want to blow up the world to exploit it. These types run America and Western societies. They also conspire with bankers to steal us blind. John Kozy is a Progressive Radio News Hour regular. His latest article headlined "How the Economy Works; the Necessity of Crime."

Forget about love. Money and fraud make the world go round. Roberts explained in discussing libor and other grand schemes. Kozy said "(w)hether people benefit or are injured is never an economic concern." They're "irrelevant." Commercial enterprises commit crimes. Growth depends on it. So does GDP. Economies are disconnected from people and their welfare. Money made by stealing it or destroying things works better than by operating honestly.

Western economies are "totally immoral." Kozy quoted a financial advisor saying: "As investors, we absolutely must not let our political beliefs, the news media, or anything else stand in the way of our quest to grow our hard-earned money into (more of it for) lasting wealth." Who cares what harm befalls others in the process. They're externality burdens for them to bear. At the same time, chickens are coming home to roost. Years of economic/financial excess head closer to day of reckoning payback. Troubled EU economies look worse off now than in decades. Money power in private hands bears full responsibility. They're heading societies off a cliff. Proposed fixes work short-term. Greater problems result.

From inception, the euro was a disaster waiting to happen. Dissolution appears just a matter of time. Existential reality shows breakup draws closer. Trouble also looms in America. One analyst said it wins first prize in the ugly contest. Europe ranks last. Nomura's chief European economist Jacques Cailloux asked: "What can they do and what would bring about a sustained turnaround in market confidence? There I struggle to find something that would really be convincing."

Regardless of up and down market swings, a secular bear market in equities persists. Two ECB LTROs (Long-Term Recovery Organization) bought little time and nothing else. ECB president Mario Draghi claims he has more tricks up his sleeve. One analyst said he's throwing spaghetti at the wall to see what sticks. Monetary policy is a blunt tool. Structural insolvency issues persist. Central bank intervention is short-lived. Core problems remain unaddressed.

European credit crunch issues cause more problems. Germany's done heavy lifting for the continent. Cross-border lending by its banks fell nearly 20% in the past seven months. It's back to 2005 levels. Deposits keep leaving Greece, Portugal and Spain for safer locations. At the same time, European banking faces a trillion euros worth of bad loans. Today's numbers are 9% greater year-over-year. Overall, 2.5 trillion euros are non-performing.

Obama betrayed Americans. His alleged economic recovery program was illusory. Ahead things look worse. In Europe they're dire. Draghi promised help. Some observers think he's bluffing. Others don't trust him. On July 30, Der Spiegel headlined "ECB Divided over Efforts to Save Euro," saying: Analysts called Draghi promising to do "whatever it takes to preserve the euro" another "platitude coming from a politician." Short covering sent markets higher. Expect europhia to be short-lived.

"(E)xperts at the central banks of the euro zone's 17 member states had no idea what to do with the news. Draghi's remark was not the result of any resolutions, and even members of the ECB Governing Council admitted that they had heard nothing of such plans until then."

On July 31, the Financial Times headlined "Time for something different from the ECB," saying: After becoming president last November, Draghi said the "security markets program" his predecessor launched was seriously flawed. "ECB hardliners (said) the bank compromised its political independence by wheeling-and-dealing with eurozone governments."

Something different is needed. "The ECB is responsible for the effective implementation of its monetary policy. But, with eurozone interest rates diverging so much, that is clearly not happening."

Draghi left key questions unanswered. "Will the ECB overcome the 'seniority' problem of a revamped bond-buying program by finally taking losses on its Greek bonds?" "How will he keep the (leery) Bundesbank on side, or at least prevent it undermining the credibility of any ECB intervention?" "Will it somehow try to distinguish between 'convertibility' premiums and other factors driving up bond yields?" Draghi's bravado gave no answers. He's been ECB president since last November. Formerly he was vice chairman of Goldman Sachs International, governor of the Bank of Italy, Italian executive director at the World Bank, and Financial Stability Board (FSB) chairman.

Established in 2009, the FSB advanced the ball closer to global monetary control. It lets banking giants consolidate power and run world economies. Draghi ran it until appointed ECB president. Now he's wrecking Europe. Perhaps Germany will return to deutsche marks and France reissue francs. Doing so might be a step in the right direction to stop him.