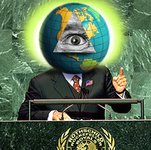 Revolution is in the air - Globally. At least the first wave of revolutionary fervour has struck the world. Commencing from unlikely Tunisia, spreading through dormant Egypt, toppling the Libyan strongman, the North African - Arabian Peninsula rejoiced in the Arab Spring. Yet the 'Occupy Wall Street' and western world change seekers are even more dramatic. Striking at the heart of capitalism, the affluent Western World is reeling under the unprecedented onslaught. The Global Anti Elite Revolution is spreading at a time when the western world's socio economic system is in disrepute.

Once the Bastille was stormed on 14 July 1789 in Paris, the French king Louis XVI was informed that it was not a revolt, but a revolution. This is what the unfolding scenario appears like today. What differentiates the present and apparently future crisis is not chaotic civil strife - rioting but idea and concept based spontaneous radical game change. There are a number of issues involved here, but a central one is 'Equality'. The monopolistic elites in most of the world control bulk of the wealth, power and resources leaving a paltry or marginal part for the masses or the majority. The traditional have nots are being joined by a large segment of the middle classes against an elite culture increasingly demonized in the information age. In the Middle East besides economic equality, political - social cultural equality drives the protesters. In USA and EU, it is more to do with economic equality as political, socio, cultural restrictions are relatively few.

The French Revolution was followed by numerous in Europe of 1848, once the Metternich conservative order was challenged, in multiple states. While Revolutions were a historical occurrence the Russian 1917, Chinese 1949, Iranian 1979 became more notable on geopolitical account. Hitler's Nazi Revolution entered history books with the fall of Berlin 1945.

Francis Fukuyama (in The End of History) proclaimed the death of communism and victory of capitalism. Today capitalism is under attack in its own bastion. If the Soviet Communist order lasted from 1917 till 1991, the capitalists' victory over Marxist Leninists - appears short lived also. From 1991 - 2011, a twenty years period was the glory of capitalism. Though of course 'Pure unbridled Capitalism' will be under severe strain in future. That this has happened in the West should be no surprise. Karl Mark a German, writing 'Das Capital', had clearly Germany in mind, and of course the classic 'Mother of all Revolutions' 1979 was French!

The Marxist Revolution was initially meant for rapidly industrializing 'Deutschland' rather than serfdom based 'Mother Russia'. Irony of history, Geopolitics and First World War etc helped usher March and October 1917 Revolutions in Moscow. Germany was still revolution prone, but the rise of Hitler deflected it into nationalism and racialism. Still the word Nazi stood for National Socialists!

Today Revolution is globally becoming a house hold word. USA, EU and large parts of the world will experience radical - revolutionary upheaval. The most ironic part of the tale is that America may be ripe for a Second Revolution. The First American Revolution, commenced as the war of independence from the British Crown, followed by numerous reforms that followed and later expansion that created the modern United States. There are several reasons for the Second American Revolution. The US economy is in decline; at least its share of Global GDP is shrinking. Washington's endless wars and outrageous expenses could put the most notorious spend thrift in history to shame. Wealth within USA is monopolized by the elite. So long as the lower and lower middle classes were in the financial comfort zone, no one thought of 'Occupy Wall Street' movement. Now Ron Paul himself talks of Revolution.

By 2020 China's economy may supersede USA. Washington's policy of containing Russia (with the world's largest land space) and China (the world's future largest economy) may not be doable. In fact, America's super expensive wars of the previous decade have already ruined its economy. The cumulative effect of all this would inspire the good hearted, charity giving, God fearing, amiable folks in America for a real change. Amazingly Washington supported the 'Arab Spring' movement, which was in fact the right thing to do, but the chickens are coming home to roost! (A Libyan Revolutionary banner said it all - 'today Libya, tomorrow Wall Street'). As per one analysis USA is among the most unequal societies.

The environment on the European continent is even more bleak for the present economic order. The European economic malaise, EU interstate disparities are further aggravating its crisis. The Euro Crisis is not simply a financial matter. It also has nationalistic, socio - cultural facets at work. Germany and Greece have not only different economies but also have different people. EU faces both intra and inter European economic issues. EU may manage its issues but the future remains uncertain. After all Europe was the birth place of modern revolutions and revolutionaries. The word radical, recently reflective of militants - terrorists may be realigned with traditional anarchists and revolutionaries.

The situation in countries like India - Pakistan and others are even worse in terms of equality. India with its inequality based ethos, may not see a revolution, but rather may face civil war and turmoil. The Brahman inspired Delhi order would strive to crush all such movements or term them as 'terrorists'! (the most popular word in India). The world's richest and poorest people live in India. Even while India wastes money as the world's biggest arms importer, hundreds of millions of Indians live in abject poverty. There are more hungry people in eight Indian states than all of Africa. The Maoists and other revolutionaries are fighting the Indian system and have been termed as the biggest internal threat by Delhi.

Pakistan of course is getting ripe for a revolution, because a corrupt, foreign influenced and incompetent elite monopolies most wealth and delivers little. People are losing faith in an unresponsive political system in Pakistan. The economic meltdown further emboldens militants, anarchists and miscreants. A reform revolution is the only solution to Pakistan's predicament. A new welfare state model and not monopolistic elite based system is the need of the hour

The world yearns for peace and prosperity. An end to wars and fair distribution of wealth within nations and societies would lead to a better world. This may have sounded utopia yesterday but is the road map for tomorrow.

The author is a retired Brigadier of the Pakistan Army. Geopolitics of Peace is an endeavour by Nadir Mir