China and Russia can free Pakistan of the US 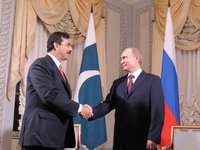 Pakistan is looking to the East for help. We are pinning our hopes on regional cooperation through blocs such as the Shanghai Cooperation Organisation (SCO). This bloc boasts support from two major regional powers - Russia and China.

Why should we support this alliance, one might ask.

To them, I would like to state simply, we need this to free ourselves from the stronghold of the US.

We have numerous reasons to support this alliance. For instance, despite all cooperation and the consequent suffering, Pakistan continues to face immense pressure from America. The recent episode of this series of pressure came when Pakistan suspended the Nato supply lines as a backlash of the Salala checkpost attack on November 26, 2011. This suspension led to threats of slashing the civil military aid to the country from the US Congressmen and policy makers.

This scared Pakistan, because the US is our life-line. They provide us with much-needed money, and we remain at their beck and call due to this unfortunate reality.

There is increasing pressure on Pakistan by the United States and several other countries towards combating terrorism, as well as in terms of the settlement of the Afghan crisis.

Washington uses financial instruments, mainly financial aid, and military threats in the form of drone attacks, to keep us dancing to their tune. It has even launched a mass media campaign against Islamabad, accusing Pakistan of supporting terror.

Pakistan's possible membership in the SCO presents a lucrative opportunity for us to finally obtain freedom from this mounting pressure. Partnership with super-powers like China and Russia can reduce Pakistan's dependence on the US and its Western allies. Furthermore, increased cooperation, with these aforementioned regional powers, can also help to lower our dependency on US financial aid - a tool used to keep Pakistan within the crutches of the US.

The Eastern cooperation can pave way for opening numerous corridors of progress for Pakistan as well as other South Asian states - mainly India and Afghanistan. The alliance can open ways for exporting energy from energy-rich countries such as Russia- Turkmenistan and Iran, to energy-scarce states such as Pakistan and India.

Energy-deficient countries can greatly benefit from this increased regional cooperation. One such example is the trans-Afghan pipeline, or TAPI (Turkmenistan, Afghanistan, Pakistan and India), which surely can help in overcoming some part of the energy shortfall in Pakistan and India.

In order to achieve these goals and gain a dividend from the SCO, Pakistan needs to participate actively in the activities of the SCO in the areas of combating terrorism, drug trafficking and the Afghan settlement. Drug trafficking has been a major area of concern for Moscow. They claim that it is the ignorance of coalition forces in tackling the issue which has led to more drugs seeping into Russia. Thus, participation and cooperation will help to expedite the process of obtaining full membership in the organisation for Pakistan.

Interaction with the SCO will create real preconditions for countries to large-scale regional development programmes, particularly in the energy, transport and information spheres. This will eventually lead to an improvement in the areas of economy and the country's security, strengthening its impact in the region.

Russia and the Central Asian countries have supported Pakistan's desire to become a full member of the organisation, while China has refrained from doing so. Sergei Lavrov, the acting Russian Foreign Minister, in a recent SCO meeting pushed for India and Pakistan's membership in the SCO, coupled with more involvement in the Afghan security situation in a post Nato withdrawal scenario.

Pakistan must convince Beijing that Islamabad's full participation in the organisation will be useful in addressing major regional issues. Pakistan must seize the moment, and exploit regional energy resources by partnering with Russia, China and India for energy and commercial trade.

Let's free ourselves from the hold of the West by embracing our friends in the East.