Serbs choose Nikolić. Yellow card shown to Tadić's "European Civilization" approach, as if the European Union was everything. There is another priority, and it is national pride. Serbia first, Serbian policies for Serbs, by Serbs, respecting international law and respecting the traditions of the country. To begin with, Kosovo is Serbia! 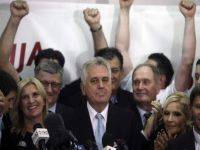 There is also the question of the Serbian homes ransacked and stolen by Croats as the Serbs were driven out of their property by Croatians and foreign elements fighting for these during the Balkans War.

Tomislav Nikolić (SNS-Srpska Napredna Stranka) has been elected Serbia's President on his fourth attempt, beating incumbent President Boris Tadic (DS-Demokratska Stranka) provoking an immediate delivery of congratulations from Croatian president Ivo Josipović and Slovenian president Danilo Turk. Josipović stated: "On the occasion of your election as the Serbian president, I offer sincere congratulations to you and wish you great success in the performance of the responsible duty," adding that he also hopes the two countries will continue developing intensive cooperation with a view to ensuring stability, security and peace in the region and the entire European continent.

Both Presidents expressed their commitment to help Serbia make the reforms it needs to join the Euro-Atlantic Alliance. However, surely the vote for Nikolić is a pragmatic one, but also a voice that Serbia is not going to roll over backwards and take whatever the "Euro Atlantic Alliance" decides to shove down its throat.

Tomislav Nikolić was born on February 15, 1952 in Kragujevats, studying at the Technical High School then the Faculty of Economics and Engineering Management in Novi Sad. His political pedigree is second to none. Joining the People's Radical Party in the 1990s, he fuelled the merger with Vojislav Šešelj's Serbian Chetnik Movement to form the Serb Radical Party (SRS) of which Šešelj was leader and Nikolić, deputy leader, a position he held until 2008, when he and other party officials split to form the SNS (Serb Progressive Party).

Married to Dragica Nikolic, the couple has two sons and four grandchildren.

Nikolić certainly understands that the western swansong is a siren's song full of promises but with a dagger concealed behind the back. After all, Serbia only has to look at Greece today to see Serbia tomorrow, and after what the West did to Serbia from March 24, 1999 to June 10, 1999 over Kosovo, trying to carve out the heart of Serbia and turn it into a CIA Mafia State... there is a lot of negotiating to do.