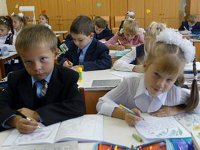 Russia (and Ukraine, and frankly most of the former Russian Empire) need babies.  Healthy happy babies with caring parents.  Too often I see girl pushing strollers and know dad is nowhere to be found; or worse everyone knows where and who he is and no one cares.  I see 13 year olds walk into stores with signs that clearly indicate that the sale of alcohol to minors is prohibited; a sign that perhaps with their backs turned towards it the clerks do not see, as juveniles are able to purchase a liter or more of beer.  There are some simple steps to prevent this but few seem to be undertaken.

The first memory I have visiting the beautiful monastery town, in which I live, is not our monastery.  It is the group of teenagers with a two liter bottle of cheap beer being passed between them, and the puffs of smoke emanating from the group.  Old men drinking beer, and sometimes vodka, on park benches.  The most depressing for me was in a cafe seeing a father with 250 grams of vodka telling his child he couldn't afford to buy him ice cream; meanwhile his son watched dad poor poison down his throat.  Certainly stories like this are not unique to the former soviet union, but how are the territories which formed the Russian Empire to return to greatness under these circumstances? What do I suggest to resolve this?

Let me preface this by noting I am hardly against alcohol consumption, tobacco consumption, or in principle even  narcotic consumption if that is what someone feels they want to do to their life.  Firstly ruthless enforcement against public drinking.  No more parks filled with bums drinking vodka or samagon where the youth that form our tomorrow watch and learn this behavior.  Further no toleration for drinking the in the centers or towns and cities.  I would suggest  a complete ban on drinking and smoking, and the sales of alcohol or tobacco products in these regions.  From a commercial perspective this would actually benefit cities as well since the travel costs and opportunities for new businesses would expand beyond city centers.

With regard to delinquent fathers I feel paternity tests should be free on demand.  Children need both parents and the money dad is spending on booze and cigarettes could be buying soccer balls and strollers instead.  A mother should be able to prove who the father of their child is easily; and both should be required to live near the child, so the child knows a family.

As I mentioned in my opening the nations forming the former Russian Empire suffer from population decline.  While the church preaches against contraception this is not enough.  I think similar to alcohol, and tobacco that contraceptives should be prohibited outside specific zones far from city centers.  Further these should, like alcohol and tobacco, should be restricted among minors.  Handing minors contraceptives is the same as telling them to have premarital sex and that it is acceptable, no differently than handing them a bottle of vodka tells them it's okay to drink.  Abortion is already extremely restricted in the territory of the former Russian Empire but this too could use improvement; abortion should be allowed only when the mother's life is in immediate jeopardy.

George Edward Green III has been a journalist since 1997, and written for several Technology, Financial, and Libertarian Publications.