Why is the ICC against Africa?

Is the so-called "International Criminal Court" a racist organization? If not, then why is Mr. Luis Moreno-Ocampo, Chief Prosecutor, suddenly fascinated by the prospect of trying war crimes in the DR Congo when an indictment against NATO was thrust before his eyes and he does nothing? And what about the NTC terrorists in Libya? 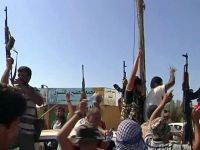 So, here we have, once again, the illustrious Chief Prosecutor of the ICC, Mr. Luis Moreno-Ocampo, whose own past is only too well known and documented, hysterically interested in bringing to justice another African, Congolese rebel leader Bosco Ntaganda for crimes in the DR Congo.

Fair enough. But if the ICC was a real court, if the ICC was really interested in upholding justice, if the Chief Prosecutor was a real judge upholding the law instead of insulting it, then why does he and why does the court he presides over not implement the same set of weights and measures for all?

Why for instance does he have this obsession with trying black Africans while there are others out there with accusations several miles long, for example that UÇK terrorist Hashim Thaçi who is busy turning Kosovo into a CIA Mafia State and who as leader of the UÇK is liable for accusations for torture and murder, organ trafficking, kidnapping, crimes against the person and crimes against property.

Why for instance does Mr. Moreno-Ocampo not reply to the indictment drawn up against NATO and sent to the ICC (* below), an indictment which sets out very clearly the NATO war crimes committed in Libya? Is NATO above the law, or is the ICC below it?

And why for instance does Mr. Moreno-Ocampo not investigate the allegations and ever-growing proof that Libyan terrorists are being trained in Kosovo, now a safe CIA Mafia State, by KFOR troops, and sent to Syria to fight against the authorities, backed as usual by the FUKUS Axis (France, UK, US and Israel)?

Why for instance does Mr. Luis Moreno-Ocampo, who has yet to win a case, not resign and admit he has no right whatsoever to insult international law any further?