Human Rights Watch and Amnesty International have complained to NATO over its refusal to properly investigate cases of mass murder of civilians in Libya during the campaign supporting terrorists to destroy the Jamahiriya Government and with it, Muammar al-Qathafi's humanitarian projects for Africa. 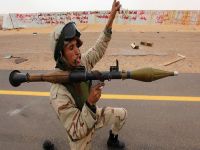 One of NATO's unarmed civilians

Human Rights Watch has documented at least 72 cases in which civilians were murdered by NATO terrorist strikes during the terrorist campaign in Libya in 2011. In a 76-page report, Unacknowledged deaths: Civilian Casualties in NATO's Air Campaign in Libya", Human Rights Watch declares that the 72 deaths include twenty women and twenty-four children.

Fred Abrahams, Special Advisor and main author of this report, declared that "Attacks are allowed only on military targets, and serious questions remain in some incidents about what exactly NATO forces were striking." In some incidents? In many incidents! What about the strafing of Libya's water supply, "to break their backs"? What about the strafing of the electricity grid? What about attacking civilian structures with military hardware, as was the case in Yugoslavia, as was the case in Iraq?

HRW continues: "Under the laws of war, parties to a conflict may only direct attacks at military targets and must take all feasible precautions to minimize harm to civilians. While civilian casualties do not necessarily mean there has been a violation of the laws of war, governments are obligated to investigate allegations of serious violations and compensate victims of unlawful attacks".

The organization calls upon NATO to launch an investigation into these mass murders during the forthcoming NATO conference in Chicago on May 20 and 21. NATO's callous reply: it could not undertake such acts of verification because it has had no members on the ground. In other words: it knows very well that it had boots on the ground, because there are numerous accounts of this violation of UNSC Resolutions 1970 and 1973 (2011).

It is crystal clear what NATO is after yet another murderous campaign cavorting with terrorist filth which murdered people in the streets, slit the throats of Negroes, sliced the breasts off women, raped girls and impaled boys with metal spikes. Allahu Akhbar! Today, the so-called "authorities" in Libya (who voted for them?) control a decreasing swathe of territory along the coast and are beset every single day with more and more determined attacks by the Green Resistance - loyalist Libyan heroes who support their country and its Government, the Jamahiriya, against this terrorist, racist scourge of child murderers, torturers and rapists.

NATO's watchful eye keeps this demonic filth in its place after having denied the Jamahiriya the right to hold an open election and after the "new authorities" have brought in decrees banning any political formation close to the Jamahiriya. What a surprise. We all know why: it would win. Therefore if the election, if and when it happens, takes place on a basis of exclusion, it cannot be deemed free and fair and any new authorities of Libya which are placed in power in any process which excludes the Jamahiriya have no legitimacy whatsoever.

Below, the author's indictment against NATO together with the co-signed, sent to the ICC (no reply) and the European Court of Human Rights (statement it would not be investigated), the cause of numerous attempts to practise freedom of expression through cyber terrorist attacks: