March of the Millions as a carefully planned provocation

At least 27 victims, mass riots, beaten journalists, criminal investigation into the use of force against police officers - these are the results of another "nonviolent" protest organized by non-systemic opposition in the Russian capital. "March of the Millions" that the opposition has been preparing since March, ended with a massacre where police officers were hospitalized, including those with stab wounds.

What happened on Sunday in Moscow was a carefully planned provocation. This leaves no doubt, given that the leaders of the march did not go to the Bolotnaya Square agreed upon with the authorities. They stopped at the Maly Kamenny Bridge, directly at the police cordon, and announced that they will not leave. 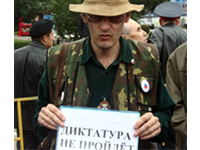 People who have already arrived to Bolotnaya square announced from the stage that the leaders were not allowed into the Square. They called for all to return to the bridge to support Navalny, Tutukin-Udaltsov and other "offended". Interestingly, the crowd that poured from the square back to the bridge marched there unobstructed.

By that time, the opposition leaders have already declared that they began a political sit-down strike. Navalny said that he would sit there until the police frees the passage to the square (which in reality was free), and Udaltsov said he would sit there until the inauguration of President-elect Putin. Later Udaltsov formulated the requirements of the "strikers" - the immediate availability of a live broadcast on federal television channels, the abolition of the inauguration and the new elections - presidential and parliamentary.

Thus, it is obvious that the opposition leaders did not initially plan to go to the rally. The main objective was to gather people in front of the riot police cordon. Further it was simply a matter of technique - in the crowd "by accident" there were plenty of militant-spirited young people. They were "accidentally" armed with smoke bombs, cans of pepper gas, firebombs and knives.

Rocks and bottles filled with gasoline were thrown at the riot police. One bottle broke and covered with burning spray a man standing behind the cordon. Fortunately, his clothing was extinguished almost instantly. The results of the first attempts to break through the cordon - a police officer hospitalized with knife wounds.

Later, while trying to break through in the direction of the Kremlin, the crowd used poles of the flags against the officers and took helmets off the riot police. Research Affairs of the Russian city of Moscow 15 minutes after the start of the collision indicated that medical care was needed by four law enforcement officers. "All of them sought medical treatment from bruises and cut wounds," said the press service.

As a rule, people do not go to peace rallies armed to the teeth. Consequently, the "battle groups" - those who were in the crowd with knives and threw bottles filled with gasoline - prepared in advance. They counted on this development. This means that they were using the 8,000-strong march that had people with children in it as the extras to have an encounter with the riot police.

Alexei Navalny, even when detained by police, was twitting: "Do not go away. We have to stand. If you are driven away - leave and then come back," "Even if they detain at a maximum, there will be 20 thousand people in the street, and tomorrow morning we will come again. Do not break away," "All those who did not go to Bolotnaya and wanted to go to Manezhnaya - go. Open a second front," and so on.

The supporters of Navalny tweeted: "The guys already have trophy riot police helmets! Chanting "We will not leave," "Now the most important thing is to keep the area until the inauguration. Tomorrow the entire world press will be at this very place. Ruin Putin's holiday," "Do not throw OMON helmets in the river, wear them. They are armor, they will protect you from police batons. "

The march and subsequent clashes with police in the so-called "March of the Millions" was not a peaceful or "nonviolent" protest. Suffice it to say that the protesters beat up NTV journalists who were covering the rally.

Riots on the Maly Kamenny Bridge and Bolotnaya Square continued for several hours. As a result, over 400 people were detained. The investigative Committee of the Russian Federation for the city of Moscow said that in connection with Sunday's events criminal cases were initiated."

At present, the persons involved in illegal activities are being investigated. We will seek the arrest of persons who caused the damage to the police," the statement of the authorities said.