Muammar al-Qathafi was taken out because his plans for Africa were starting to cost western imperialist powers too much in lost revenue and an independent Africa interested nobody among those nations which had grown rich by pillaging resources and destroying societies, before these were freed by the Soviet Union. 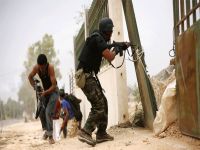 PRAVDA.Ru: The war against Libya, according to the west, was to free the Libyan people from a despot and a dictator. This fooled a lot of people and shaped public opinion, giving a green card for the mission creep that ensued. Those of us who know Africa however, knew very well what was at stake.

Chamakhe Maurieni: The war on Libya was a war of many reasons, some of which include the outspoken character of Muammar Gadaffi, his plans for Africa, and probably the major reason: his role as a guide for Africa, especially sub-Saharan Africa, physically and spiritually. Western imperialist nations and their camouflage agencies like the CIA, NATO etc knew the enormous protection given freely by Muammar Gadaffi´s revolutionary Libya to Africa, most especially sub-Saharan Africa.

Libya´s war was a war to destabilize the entire sub-Saharan African states. Prior to the invasion, apart from the Socialist People's Libyan Arab Jamahiriya, virtually all of the states around sub-Saharan Africa were militarily and internationally weak, thus their only protection was Libya.

Immediately Libya was taken out, they became open to infiltration by the always resource-hungry west. One of such sub-Saharan states which is now suffering the effect of the invasion of Libya, is Nigeria.

Pravda.Ru: We have all heard about what is happening in Mali. Now, you lived in Nigeria and know the country well. You are saying that Nigeria is next?

Chamakhe Maurieni: Nigeria is known to be a country of diverse tribes, with diverse
languages. It is believed there are well over 250 different tribes and languages in Nigeria. Nigeria is rich in mineral and natural resources, 150 million strong, but is very much non-existent militarily and in terms of security. The Nigerian foreign reserve is estimated to be around 150 billion dollars, this is a major target for the ever-hungry western imperialists, and in the case of Nigeria, they are just two - The United States and Britain.

Pravda.Ru: Nigeria's position on the Libyan invasion and act of butchery by western-backed terrorists was deplorable.

Chamakhe Maurieni: Due to lack of foresight, the current Nigerian government voted for the UN SECURITY COUNCIL RESOLUTION 1979, and was amongst sick African nations who supported the Libyan invasion. I should state here that the corruption-laden Jacob Zuma government of South Africa voted for the resolution. Also, the Gabonese Government of Omar Gambo.

The war in Libya gave way to free flow of weapons around sub-Saharan Africa, and this was and is continually being channelled by Al-Qaeda, under instructions from their western masters through the ever-porous boarders of Northern Nigeria. Long before now, the Boko Haram sect had been created; the current name of BOKO HARAM being the newly adopted name.

In 1991,it was led by Islamic radicals - Mallam Yakubu and Mallam Zakzaky in Katstina. Back then, they got national prominence in Nigeria for burning two print media houses - The Fun Times and the Daily Time, under claims that they had abused Prophets Mohammed and Jesus.

They moved on and over time have had a series of leadership changes.  Currently, the two major so-called powers of the west- Britain and the United States - are using members of the Boko Haram sect who are unemployed youths, to divide further the already and always divided Nigerian state.

Pravda.Ru: You are saying that Boko Haram is an instrument to help the West take Nigeria?

Chamakhe Maurieni: Boko Haram is a catalyst for war in Nigeria. The imperialists have tried to cover their tracks by influencing the release of false Wikileaks cables, stating the political class in Nigeria to be the sponsor of the Boko Haram sect.  The entire plan appears complex, but is quite simple.

At present, the southern part of Nigeria continues to accuse the North of attacking southerners, whilst Christians accuse Muslims of attacking Christians.  The bombing and burning of Churches is meant to be a catalyst to create a religious war in the country. There are plans to begin bombing of Islamic structure in the south, and that is expected to balance the religious blame-game and move the nation nearer to a religious war.

The Imperialist west also hope to eventually take the Boko Haram attacks to the South of Nigeria, thus eventually leading to a civil war between the south and the North. There is a also a broad plan to create further chaos by instigating the various tribes in Nigeria against one another.  As usual, the imperialists will provide weapons, ammunition, moral and financial support to as many tribes and religious factions as possible.

Simply put, there are plans for tribal war and a religious war to take place at the same time. This whole scenario is expected to be set rolling in a couple of months by the assassination of the current Nigerian President -Goodluck Jonathan.  The western imperialists hope this event will lead to accusations, counter accusations and then war.

Apart from the foreign reserve which the west has got its eyes on, they also have their eyes on oil and Uranium, which is vast but unexploited in Nigeria.  Aiding this aggressive and greedy western plan, is the ignorance and cowardice, and corruption of the current Nigerian government, and past so-called Democratic governments in Nigeria.  The current Nigerian government has always sought and depended on intelligence and secret service reports from the United States to act on any internal problem, since its own intelligence unit is basically non-existent or dysfunctional at best.

This is as a result of the government's aggressive corruption, which has always been covered by the United States and her western rogue thugs.

*Timothy Bancroft-Hinchey, Director and Chief Editor of the Portuguese Version of Pravda.Ru has extensive family and professional contacts in Africa.

**Chamakhe Maurieni is a Moroccan born Freelance writer, author, student and graduate of psychology. This dual nationality, half-blooded Moroccan national has dedicated his young life to researches and investigations of all scales and sizes. Some of his current investigations include match-fixing in football, and he has just begun a research into the Miss World beauty pageant which he has always termed a "glorified illusion sponsored by drug cartels and barons."

As a freelance writer, he has since the age of sixteen written articles on varying platforms across Sub-Saharan Africa and Asia under different names. He is a top contributor to various Independent news agencies such as the Mathaba News Agency. He speaks fluent English, French, Arabic and a little Japanese. He is a nominee for the Bridport poetry prize.

He is also author of the book Facebook is Deception. Online copy: [volume 1] [volume 2].