The key words for the USA, its poodle states and the western media it controls are "dissident", "Chinese", "blind" and "lawyer", the latter being an interesting choice for a nation which controls the Guantanamo Bay concentration camp which provides an example of human rights abuses, breach of every fibre of international law and common decency. 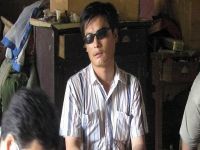 The western media machine is rolling out another story, this time composed by various flash words strung together, such as "Blind Chinese lawyer", "Chinese dissident lawyer" or "Blind Chinese dissident" to create an image in the hearts and minds of the gullible readers and viewers who swallow everything they are fed in their daily dose of brainwashing and propaganda, informing them that there are dangerous "regimes" out there where "human rights" and abused but their own "governments" will provide protection. The "them" justifies the "us" through a cynical manipulation of fear.

And so now we find out that among the Bad Five in terms of execution of its own citizens is the United States of America along with friends Iraq and Saudi Arabia. Figures. Remember Abu Ghraib concentration camp anyone, where prisoners were tortured, where they were set upon by hounds, where their food was urinated in, where they were sodomised and where they were forced to commit deviant sexual acts by US guards who were, why, "just having fun"?

And here we have the US of A interfering in the internal affairs of the PR China when Guantanamo Bay concentration camp in Cuba, a US-run detention centre where people are held without any pretence of access to due legal process, stands out like a festering wound, an insult to international law and a shining example of human rights abuses.

This, after the wanton slaughter of hundreds of thousands of children in Iraq through inhumane blockades and subversive tactics - among these the burning of cereals fields - and after the lies and skulduggery leading up to the illegal invasion of Iraq, in which a sovereign state was attacked by the FUKUS-Axis (France, UK, US), in which the FUKUS military hardware was purposefully used against civilian structures, in which hundreds of thousands of civilians were murdered, in which citizens were snatched from their homes in acts of kidnapping, illegally detained, tortured and killed.

This, after Libya, the worst travesty of international justice, in which the UNO was yet again insulted and in which war crimes were committed by armed terrorists goaded on by their FUKUS paymasters.

So Washington and poodle states, you were saying? In fact, what moral right do you have to opine on anything whatsoever?