White ribbons in America. Will Russians march in solidarity with us? 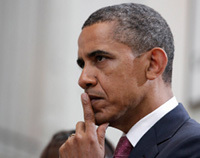 In the US we've watched protests in Russia, claims of elections fraud and white ribbons of solidarity with dissidents.

But what about the United States of America? The irony is that we, all 311 million Americans  are victims of the biggest fraud in the history of this nation. Specifically, this is the fraud committed by one, Barack Hussein Obama. Unfortunately, the level of corruption among our governmental bureaucrats and judges and heavily censored and manipulated puppet US "main stream" (or truly backwater) media is enormous. Even with the undeniable evidence of fraud committed by  Obama, we are yet to get a court ruling  removing him from the ballot and prosecuting him to the full extent of the law for elections fraud, use of a computer generated forgery, claiming it to be a true and correct copy of his valid birth certificate, use of a stolen Social Security number and hiding his identity under the last name Soetoro and Soebarkah.

Well, I better start from the beginning. As Obama started running for the US Presidency, I could tell that much of what he was saying did not ring true and did not check out.

Probably the most troubling was the fact that he is using a Social Security number assigned to another individual.

In the United States the Social Security numbers were assigned by the states. The first 3 digits of the number that Obama is using, (042) were assigned to the state of Connecticut. Obama was never a resident of Connecticut and there is no legitimate reason for him to have this number.

I can disclose this number and make it public in this article for two reasons:

1. Inadvertently Obama himself made it public when he published his tax returns on line and did not flatten the PDF file. Thousands of individuals around the world opened the file using Adobe Illustrator program and got the number 042-68-4425.

2. We know that this number was assigned to a resident of Connecticut born in 1890. (If you believe that Obama is that person, you can stop reading this article, as nothing will get through to you anyways.)

In my research I was able to secure assistance of three licensed investigators: retired Scotland Yard senior officer Neil Sankey, licensed investigator Susan Daniels and recently retired senior Deportation Officer  John Sampson. All of them searched different national databases, which are routinely used by licensed investigators and attorneys and came to the same conclusion: Barack Hussein Obama, President of the United States and commander in Chief does not have a valid Social Security number. National databases showed his name linked to several Social Security numbers, none of which was issued in the state of Hawaii, where he grew up. The number that Obama used more often for most of his life, is a Connecticut Social Security number issued to a resident of Connecticut, whose date of birth shows as 1890. This was the same number that Obama posted on his tax returns: 042-68-4425.

I personally ran Obama's registration with the selective service with the military. I entered Obama's name, date of birth and the Social that Obama posted on line with his tax returns. It showed that indeed with yet another governmental agency Obama used this Connecticut  Social  Security number 042-68-4425.

Later a researcher by name Linda Jordan ran this number through E-verify, official Social Security verification service. It showed no match between the number  and the name Barack Obama.

As I was conducting 21 law suits challenging Obama, I was getting thousands of e-mails and comments on my website OrlyTaitzESQ.com. Among thousands of e-mails were documents that came from concerned citizens from all of the country. Those documents showed more and more evidence of fraud committed by Obama and more and more evidence of unprecedented corruption in the top echelons of power in all three branches of the government and corruption among our manipulated media executives.

I received an e-mail from a retired US air force colonel. Colonel Gregory Hollister ran yet another governmental Social Security Number Verification Service, SSNVS. It showed that the number Obama is using in his tax returns and selective service documents was never issued to Barack Obama.

I watched the hype media reports about Obama. One of them was an evening report with Katie Couric, who purports to be a top reputable journalist. The report showed Obama's old school in Indonesia. It showed his school records, where Obama was listed as a citizen of Indonesia going under the last name of his step father Lolo Soetoro. The same Katie Couric, who did her best to show the Republican Sarah Palin in a negative light, was just sitting there, staring at the screen without ever posing a question: "What is Obama's citizenship status? Is it America or Indonesian? What is his legal last name?"

Couric    just   put on her blinders and dutifully took her place in the line of entertainment elite executives and "luminaries", waiting to enter the White House and enjoy lavish parties. She was standing in line to kiss the feet of the liberal Democrat messiah, instead of waiting in line to ask some hard questions, choosing to sweep under the rug those pesky questions of Obama's Indonesian citizenship, a name, which was not legally his, lack of a valid birth certificate and so many other unanswered important questions. Our entertainment elite who calls itself "progressive", ended up being one of the most oppressive, repressive regime propaganda machines. Very few were reporting a word of truth about Obama and so many of them were complicit to the biggest case of fraud, forgery and treason in the US history.

On May 2, 2011 I was scheduled to argue my case in front of the 9th Circuit court of Appeals. I was the first attorney to get any hearings in open court on Obama's case. By 2009 I was able to reach the 9th Circuit Court of Appeals to hear the case. At the same time Donald Trump was raising concerns on Obama's eligibility and Obama's lack of a valid long form birth certificate.   Obama's approval ratings started dropping like a rock. By the end of April 2011 nearly half of Americans did not believe Obama had valid identification papers and they wanted to see those papers released.

Obama had to do something. On April 27th, only a few days before the hearing in the 9th Circuit Obama released what he called a copy of his long form birth certificate. As I looked at it, I should see right away that it was a crude forgery, not even a good one. I remembered other long form birth certificates from 1961. Those were on white paper with sighs of aging, had a readily detectable seal, the document had defined borders. What Obama provided was obviously a joke. The paper was different, there were no signs of aging, no defined borders, letters and numbers were of different fonts and sizes.

As I was invited to the interviews on TV and radio, I was viciously attacks. On May 1 in the evening, only a few hours before my hearing in the 9th circuit and only 3 days after Obama released his alleged birth certificate, Obama appeared on national TV looking mighty Presidential and announced that he captured Osama Bin Laden. Surprisingly Bin Ladin was not sent to Guantanamo for interrogation, to get information about his vast military network, but rather he was immediately shot in the head and thrown overboard to feed some marine life. Celebration started, next morning I was arguing my case in the environment of the national hysteria. Donald Trump with all his millions or billions simply retreated. Many attorneys, who were involved in this fight,  gave up and decided to turn to something else, as they felt helpless to go against this corrupt establishment.

I was watching everything that was going on around me and I felt like I was in the Germany in the early 30s. I would wake up in the middle of the night with nightmares. While the iron curtain was lifted in the Eastern Europe, the iron curtain of the most oppressive and the most illegitimate regime descended on the United States. I could barely stand the heavy load of everything thrown at me, the barrage of assaults, insults, tampering with my car, attacks on my family, attacks on my children. Some were saying: do you need the truth more than others? Is it worth it? Do you really believe you can win this David and Golliath fight? My answer to that was "Remember who won the David and Goliath fight?"

My perseverance started to bear fruit. Soon I received reports from a number of experts: Douglas Vogt, Felicito Papa, John Sampson. All of them were confirming that Obama's alleged birth certificate was a forgery. In January of 2012 for the first time in the U.S. history I was able to issue a valid, court confirmed subpoena for the US President (or should I say someone usurping this position) to appear in court and provide his valid identification papers. Obama filed a motion to quash my subpoena. His motion was denied by a judge. Obama had to appear, however he was a no-show. It became crystal clear to everybody in the courtroom that he and his attorney, Michael Jablonski, did not show up for trial, as they have nothing to show. Obama does not have any valid identification papers. On March 1, 2012 I was fully vindicated, as sheriff Joe Arpaio of Maricopa county, Arizona confirmed all of my findings, confirmed that Obama is indeed a fraud, who is using forged identification papers.

On March 9 it was announced that I qualified as a Republican candidate for the US Senate running in the primary. Recent polling by the most respectable Rasmussen-Pulse public opinion poll show me leading all of the other GOP and other challengers to California senator Diane Feinstein. While corrupt party establishment threw their support and money behind another candidate, Washington lobbyist Emken, I was getting support of the public, while the establishment puppet Emken was running dead last with only 1-2% of the vote. Of course, in our heavily rigged elections everything is possible and  I would not put anything past our corrupt establishment, however so far so good, I am moving along and inching towards victory.

Shortly, on April 16 2012, 9 am I will appear before a special judge, R Kenneth Coleman in the first Circuit court in Jackson, Mississippi. This will be more than just another trip, another  one of over 50 grueling trips around the country in pursuit of this case. Now I have  a confirmation of all of my findings by one of the most respected sheriffs in the country. I always said: "Obama needs to win every fight of eligibility, I have to win only once". The fight continues and I hope to win this fight soon.

For years Russians looked at the US as the beacon of Democracy and freedom. Today, in the dark days of illegitimate regime of the paperless crook Barack Hussein Obama, Americans are looking at Russians and other freedom loving people around the world and hoping for support in their struggle for freedom.

Now there are white ribbons in America. Will Russians march in solidarity with us?

All of the pleadings and supporting documents can be found on Dr. Taitz web page OrlyTaitzESQ.com

Leading Republican candidate for the US senate in CA 2012