Portugal: General Strike - What happens when a people says Enough!

Portugal will have a general strike on March 22, fruit of the frustration felt by the huge majority, faced with a disastrous, inhumane and shameful economic and social management, following a line which dictates that withdrawing money from the economy will make it grow and will somehow create wealth... a policy conceived and followed by imbeciles. 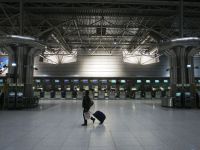 The Portuguese fought for decades for their rights, winning victories that gave the worker a decent enough status - a timetable that in principle more or less respected the ethic that working hours should represent a third of the day (eight hours), fought for decades to guarantee safety in the workplace and to gain rights against dismissal by reactionary forces who used and abused people when convenient and afterwards dismissed them unceremoniously.

The bad political management of Portugal is not new in this column and it is not surprising to those who have followed Portugal during the last decades. The politicians belonging to parties in power since 1974, namely PSD/PPD (Social Democrats - right wing), CDS/PP (Conservatives - right wing) and PS ("Socialist Party" in name only - right wing) ruined the country and destroyed the social fabric, following maniacal policies, eliminating fisheries, industry and agriculture, accepting financing to destroy or not to produce and then when Portugal hits the bottom of the barrel (where else could it go, without producing anything?) instead of injecting money into the economy, they withdraw it even further. Well, they are daft, or what?

Moreover, they accepted the orders of the "Troika" as a lackey accepts his master's orders, nodding "Yessir!" with his head obediently down and the ears pinned well back. Good doggie! How servile can you get? And while these changes were made, neither did the Troika take into account the reality of each Portuguese (because nobody in Europe could understand Portugal without living there) nor were the measures implemented through a consultative process; they were introduced in a draconian fashion demonstrating a total absence of respect for democratic principles, turning the lives of most of the Portuguese into a living hell of uncertainty as to the future and concern in the present, while removing any possibility of the economy to grow.

How can you make an economy grow when unfair and impracticable taxation leads an already beleaguered society to breaking point, how can an economy grow when measures are implemented which do nothing to protect the firms in times of trouble, when no help is provided to support them when thousands of jobs depend on it? And moreover, at a time like this, with over 1.2 million people in a total population of ten million out of work, the government postulates policies such as increasing the rents of houses, precisely when it should be encouraging the expansion of this sector, since hardly anyone can buy a house because banks are far more focused on managing what they have than on doing what they were created for - lending money.

One may ask the question, what are the banks for and what purpose do they serve? If this is how they behave, it would be better to nationalize them and use the money - not their money, but the money of those whose deposits they make profits from -  for what the banks stubbornly refuse to do, namely stimulate the economy; send the troika packing; suspend payment of the debt and renegotiate it; finally, leave the Zone Euro, because Portugal has never had and never will have the conditions for the economy to function with the same constraints as Germany and turn further towards the CPLP space (Community of Portuguese-Speaking Countries: Brazil (Latin America); Angola, Cape Verde, Guinea-Bissau, Mozambique, São Tomé and Príncipe Isles (Africa); Portugal (Europe); East Timor (Asia).

If the enlightened and mentally advanced fools who have governed Portugal for decades started to understand the history of the country that they led to the brink of extreme poverty, they would understand that Portugal is not a Mediterranean country, and never will be - it is an Atlantic country which never looked eastwards towards Europe but which for centuries lived facing the sea, out into the CPLP space.

Why then is it that these enlightened idiots allowed Europe to take control of all national production centers, why did they let Europe close them and why did they negotiate trade-offs in such a way that they gained nothing at all in return? They can hardly expect the history book to call them competent, can they?

The absurdity is not that Anibal Silva (now President in his second term) now appears speaking of industry and agriculture, forgetting the fact that he was Prime Minister between 1985 and 1995, precisely when millions and millions were pouring into Portugal's frontiers, and forgetting that he was the main one responsible for the bad economic and financial management in the country's lack of preparation for the European challenge ... the absurdity is that the Portuguese have voted for him. Twice. Why? Because he looks "serious."

Ridiculous as it may sound, as hard to believe as it may be, it is however true.

Those who speak of the effects of a cataclysmic exit from Euro ignore the fact that the consequences are as strong or as dramatic as those who manage Portugal want them to be, though it would not surprise me at all that they totally ignore these consequences and have no idea how such a sensible option could be taken. There are ways to create cushions, there are alternatives to facilitate a lower social impact. But with a banking sector that does not even produce a single solution to the deep crisis that the banks themselves and the poor governance created by their ineptitude, incompetence and total inability, and a government whose social concern is absolute zero, a government which merely implements laboratory policies... the answer is, only with another government, only with another banking sector. And I repeat, a nationalized one.

To leave the Eurozone is to create conditions to stimulate once again the means of production that those who have governed Portugal for decades sold down the river, it is to stimulate agricultural production, is to populate the countryside, taking from the cities the evils caused by overcrowding, it is to work the land that lies barren, it is to create jobs, it is to increase exports.

All of these results reduce the burden of paying state subsidies, they create more money and national wealth through a stimulated economy, through more, but not higher, taxes.

I am not talking about a country run by incompetent self-centred and cynical buffoons, who flourish in a kingdom where those who have one eye are kings among the blind, where the political fabric is just a bunch of donkeys to be ridden by Europeans who have never taken Portugal's interests into account. I am speaking about a Portugal ruled by the Portuguese for the Portuguese, where the Portuguese resources are managed for the national good and are not the playthings of restricted groups.

For those who doubt what I am saying, consider the egg crisis round the corner and draw your own conclusions in a few weeks' time.

The solution is the opposite of what is done today in Portugal and the people are right to say ENOUGH! out loud and clear; they are indeed entitled to continue the process until something or someone appears in Portugal capable of managing the country for the future with vision, intelligence and social preoccupation and without partisan or personal interests.

Maybe that someone really is a mythical figure from the past, like King Sebastian. That being the case, Portugal is condemned to dream about ghosts and chimeras. Or is it?