Increasing intimidation against Palestinians in Palestinian lands by Israeli "settlers" occasioning denial of access to water supplies - the latest in a long list of humanitarian abuses carried out by Israelis who claim the right to the lands Israel seized and occupies against international law. This time, the UNO has condemned them. 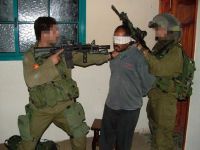 A report carried out by the UN Office for the Coordination of Humanitarian Affairs (OCHA) claims that as a result of the seizure of water springs and a policy of intimidation, threats and erecting fences to make sure Palestinians do not use water sources near their "settlements" (illegally erected housing projects), Palestinians have lost access to the water supplies they have long relied on - in lands which are their home.

Water, the very essence of life. Universally recognised as a universal substance which must have universal access...not for the Israeli settlers. They have taken full control of thirty springs and have totally denied the Palestinians who used to live from these resources access to the water. The Palestinian land has been illegally annexed, their centuries-old water resources - this basic element, the giver of life - have been stolen from them. Does this not speak volumes about modern-day Israel which supports these settlers?

Navi Pillay, UN High Commissioner for Human Rights, states there is a direct link between Israeli expansion into Palestinian territory and human rights abuses, calling on the Israeli government to investigate fully: "The Israeli Government must investigate all incidents of violence against Palestinians and ensure that the perpetrators are held accountable," she said at the UN Human Rights Council's general debate on the human rights situation in the occupied Palestinian territory and other occupied Arab territories.

She blamed the Israeli part for perpetuating poverty, unemployment and the deterioration of healthcare, education and water and sanitation facilities. She also criticised the Palestinians in Gaza for arbitrary detention, ill-treatment of detainees and the indiscriminate firing of projectiles into Israel, calling the latter "illegal and unjustifiable."

The Palestinian Authority faces insurmountable problems. For a start, it is obvious that Israel has decided it will continue to build colonies on illegally occupied land as and when it chooses and will continue to steal, bully, burn, cajole, harass and make life impossible for the Palestinian residents. The treatment of the Nejev Bedoiun serves as a prime example of what Israel is capable of.

Why for example has Israel recently decided to build 500 homes in the Shilo settlement on the West Bank and why does Israel make attempts to legalise settlements which have previously been built against the law? How can Israel legalise what is clearly illegal? Why for example does Israel continue to bulldoze Palestinian homes built in Palestinian territory? In 2011, according to the OCHA (UN Office for the Coordination of Humanitarian Affairs), the Israeli authorities destroyed 622 homes and structures belonging to Palestinians, displacing 1,100 people, over 600 of these being children.

Israel's behaviour is reminiscent of the child who pushes the limits and provokes its minder further and further, stretching the patience to breaking point, screaming and throwing a tantrum on the supermarket floor and then complaining when it gets a belt round the ear.

When it does, the other shoppers in the supermarket stand round and applaud.