What is the difference between Sergei Lavrov, Hillary Clinton and William (Jefferson) Hague? One of them is a Diplomat, the other two are a very poor duo of English-speaking wannabes who insult the international community with every word that comes out of their mouths and who betray their countries with each and every act. 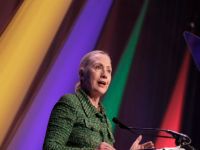 Hague's claim made today (Monday) that there have been diplomatic consequences for "Russia and China" over the decision to veto the more intrusive impulses of the FUKUS-Axis (France, UK, US and Israel) is a telling example of his arrogance, insolence and top-down, know-it-all, break-wind-in-your-face approach to diplomacy, not his middle name. For a start, get the countries right. It is the Russian Federation and the People's Republic of China.

Secondly, what "diplomatic consequences"? There have been diplomatic consequences for the FUKUS-Axis for sure, after their lies on Libya and their wholesale act of slaughter, arming and financing terrorists and sending them into Libyan society to do what they did. And now the diplomatic consequences for the United Kingdom and the United States of America are that their governments sided with those who sliced the breasts off women in the streets, who sliced the throats of negroes because they were black, who committed ethnic cleansing, who raped children, who tortured people (an American speciality), sodomised detainees, torched buildings, went looting and stealing. They copy the US Armed Forces pretty well, in fact.

The diplomatic consequences for the United Kingdom and the United States of America are, after their spectacular "mission creep" in Libya, where the book stated that they would police a no-fly zone and in fact the operation turned into a full-scale invasion complete with the FUKUS-Axis' terrorists and special forces with boots on the ground, that the word of London and Washington has as much weight, or less, as that of a desperate heroin addict in anextreme phase of withdrawal.

In fact, the integrity of the dodgy-looking fellow hissing in the darkness peddling the proverbial second-hand Romanian wristwatch is greater that what Hague and Clinton have made their countries represent.

They are liars and their forces have committed war crimes and arguably, crimes against humanity. The UK and USA as part of the FUKUS-Axis have broken international law, they have broken the terms of the Geneva Conventions. The foreign policies of these two pariahs in the world community, these rogue states, are regarded with hatred and derision by the vast majority of humankind.

Regarding Syria, due to the recent history of these two countries, and due to the pathetic performance of these two abject failures at the highest level of diplomatic representation of their countries, what authority to Washington and London have to opine on Syria? They wanted another war, they didn't get one. And due to their lies on Libya, they aren't getting one, precisely because one cannot believe a word they say.

Now they are presenting "evidence" of "massacres", such as the one in Homs, accusing one side and without bearing in mind the fact that slitting the throats of women and children is the sort of activity their friends got up to in Libya, and was far more likely the result of the actions of the terrorists they are supporting in Syria than the Syrian Armed Forces.

Let us be honest: Libya was about oil. Syria is about oil, it is about depriving the Russian Federation of her Mediterranean naval base, it is about placing the final stepping stone for the attack on the Islamic Republic of Iran, it is about disbanding HAMAS and Hezbollah and allowing Israel to steal more land and build more colonies, it is about turning a blind eye on Israel's nuclear bombs, it is about then expanding northwards into Central Asia today and Siberia tomorrow, then encircling the PR China.

So who the Hell do Hague and Clinton think they are fooling? Suppose they went home, took their troops with them, and minded their own business for a change? We, the members of the world community, did not elect Clinton or Hague or Obama or Cameron. Therefore, suppose they practised their authority over those who elected them?