NATO calls him a "rogue" soldier who snapped after having a breakdown and then (sigh) out come the violins and the apologies (what a drag eh?), well, expressions of "regret". Rogue? After peeing on corpses, burning the Koran, urinating in food, sodomizing Islamic prisoners and setting dogs on people? This is not a one-off. It's another NATO massacre. 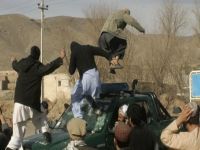 The pathetic acting of the NATO spokespersons on camera makes you want to throw up. The representatives of the same organization that masterminded massive breaches of international law, which perpetrated acts of murder and slaughter against civilians across the globe, have the audacity to look the camera in the eye and say they regret the loss of civilian lives in Afghanistan.

In "civilian lives" read NINE CHILDREN and at least THREE WOMEN, slaughtered by yet another American coward who went on the rampage last night, murdering eleven people in one house, moving on to another and murdering four more then one in another house. Sixteen civilians, 9 of whom were children and at least four other civilians injured and hospitalised is the tally of this maniac.

Let us remember NATO for what NATO is and let us remember what NATO has done in recent years. Supposedly a defensive organization formed to counter any aggressive ambitions of the Warsaw Pact (which was always a defensive alliance itself), NATO gave guarantees to the latter that it would not encroach eastwards. What happened? It encroached eastwards.

So do we believe a word NATO says? Like we believe the siren-songs of a desperate heroin consumer in the last stages of withdrawal but then again, NATO and heroin have had a little romance in Afghanistan, as we can see, or rather used to see, before they were removed from the Net, in those photos which showed US soldiers apparently standing guard over opium poppy-fields. They also removed the videos of US aircraft burning fields of cereals in Iraq in the 1990s.

If today's massacre were a one-off, then fair enough, it was a soldier who snapped. But even then, you do not waltz into a foreign country and let loose this type of lunatic on the civilian population. If you train a man and give him an automatic weapon, you are accountable and it is hoped the USA will produce lawyers who will sue their administration or Pentagon on behalf of the victims' families.

However, it was not a one-off. It comes as the latest in a string of demonic and barbaric acts by NATO, the organization responsible for the illegal act of slaughter in Iraq against every fibre of international law. Who was it that detained people illegally? Who was it that urinated in their food? Who forced Moslems to eat pork? Who set dogs on people who had been kidnapped?

Who sodomized Moslems while under detention? Who forced Moslems to lie in piles and commit sadistic and perverted sexual acts upon one another? Who lied about the casus belli in Iraq? Who lied about the casus belli in Libya? Who is lying about Syria? Who is lying about Iran? Who tortured people? Who had people tortured on CIA flights and on CIA camps overseas and on CIA vessels? Who holds detainees at Guantanamo illegally, without due legal process, without even an accusation? For years?

Who trained terrorists in Libya and then used them to commit the most horrific acts against women and children? Who let loose gangs of racists and rapists and murderers in Libya? Who is behind the arming of terrorists in Syria in a re-run of Libya? How many massacres of wedding parties has NATO committed in Afghanistan?

In fact, rather than issuing lame "oh dear, sorry!" comments, after failing to say anything when the grandchildren of Colonel Gaddafi had freedom and democracy imposed upon them from 30,000 feet, why doesn't NATO admit it has lost its way, that it is losing in Afghanistan, that the only way it extricated itself from Iraq was by paying "insurgents" not to attack, as indeed it is paying the Talebaan not to attack in Afghanistan, and pack up its bags and f*ck off back home, cowed, cowering and hated by the entire world community?

The world has had enough of NATO and its murderous policies, invasions, bombings, strafing of civilian structures with military hardware, interference in the affairs of sovereign states and massacres. NATO is the enemy of humanity. Nato Is a Terrorist Organization.