One hundred and one Women's Days later, we see that many battles have been won. In 1911, women could only vote in two countries. However, are women equal today? Victories in a few battles does not mean the war is won, there remains far more to do. 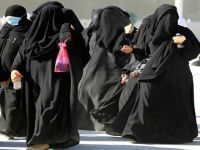 However hard you fight and however much you conquer, the history of human development teaches us that reactionary forces will rise up to try to destroy what has been achieved and turn the clock back, holding down the masses and attempting to impose the rule of a restricted group which controls wealth. One look at the financial and economic "crisis" and the ensuing outrages against accumulated labour and social rights proves this.

As far as women are concerned, they have to continue the fight, using instruments such as the United Nations' UN Women which forms networks and launches projects worldwide towards gender equality, and combating gender-based violence, striving for the empowerment of women. Women should not expect that rights are given to them just because they are women.

True, they have won many battles since members of the suffragette movements gave up their lives so that woman could have the vote and today 67 countries have laws which mandate equal pay for women, while 126 have guaranteed maternity leave. Yet 70% of the world's poor are women, 66% of the illiterate are women.

And are women truly free, even in industrialised countries? Do they in fact have equal job opportunities? Are they really free to have a child and sustain their position at work? After 101 Women's Days the pay gap in OECD countries is 17.6%. In the Middle East, less than 30% of women are employed - the situation in Libya is far worse than it was a year ago after the murderous activities sponsored by the FUKUS Axis (France, UK, US and Israel). Globally, women own 1% of the world's property as compared with 99% for men, 10% of income compared with 90%.

80% of the victims of human trafficking are women; 60 million girls are forced to get married every year as minors; in the European Union, which adores calling itself "civilised" and imposes itself on other regions with a top-down approach, between 40 and 50 per cent of women have been the victims of some form of sexual harassment at work; 25 per cent of women worldwide are subjected to physical or sexual abuse.

What have the 101 Women's Days done for the one third of women beaten, coerced into sex or abused during their lifetimes in some regions of the globe? For the one sixth of American women who have been the victims of rape or partial rape or attempted rape?

In the USA a woman is beaten by a man every nine seconds. Worldwide, in some areas only 20 per cent of victims of domestic abuse report the incidents.

UN Women runs a number of excellent projects aimed at prevention and awareness both for women and for men. At the website on UN Women you can inform yourself and/or your community of the programs that are being run. UN Women encourages people to get involved.

After reading this article, I urge the reader to get involved and to continue this fight. There is so much more to do. What "man" stands back and sees women abused and discriminated against without taking action?