The black contribution to anti-black racism 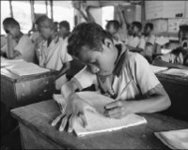 Some recent incidents involving black folks against non-blacks in the Western world (to be illustrated below) reveal a disturbing phenomenon that many black folks are quick to blame the institution of white racism for their relative lack of success in some endeavors but are slow to look into their behaviors and mindsets which have so much contributed to anti-black racism in the first place.

A good question here is: Why do many people have the common perception that blacks, on average, are not relatively capable in intellectual and refined endeavors, when contrasted with whites or Asians, for example, although they excel in other endeavors which are more physical, sensual, comic, and the like? The words "on average" and "relatively" are used here with caution, so as to stress that there are variations within a group and that the comparison among different groups is not absolute but relative.

With this caution in mind, only some far-right extremists like Adolf Hitler would deny that blacks indeed excel in certain areas like sports and entertainment, because, when Jesse Owens, a black American athlete, won four medals in track and field in the 1936 Summer Olympics in Berlin, Germany, Hitler was quite upset and refused to shake his hand. And it is quite well known that, in the U.S., black Americans dominate in certain areas of sports and entertainment (e.g., basketball, boxing, football, track and field, rap music, tap dance, jazz, black comedy, and so on).

Still, the common perception is that blacks, on average, do not excel in other domains of human endeavors which are more intellectual and refined (rather than physical, sensual, comic, and the like). Historically, blacks in sub-Saharan Africa (as contrasted with the Arab and Mediterranean folks in North Africa), even well before the modern colonial conquest of the vast continent by the Europeans, had never excelled in producing the masterpieces (or great works) as often seen in major civilizations known in history (like the European, Chinese, Indian, or Arab civilizations, for example), in such fields like mathematics, science, engineering, logic, epistemology, theology, aesthetics, moral philosophy, political theory, architecture, metaphysics, jurisprudence, military studies, and so on.

This one-sided excellence of black folks in non-intellectual endeavors (like sports, entertainment, and the like) is all the more reinforced by the behaviors and mindsets that are displayed in some recent incidents involving black folks against others. Consider, for illustration, some examples below.

The first illustrated example is that, on February 18, 2012, the Ukrainian boxing champion Vitaly Klitschko (a white) and his challenger Dereck Chisora (a black Briton) got together for photographs at the weigh-in for their heavyweight bout in Munich, Germany, but all of a sudden, "the Zimbabwean-born Briton smacked Klitschko hard with his open right hand. With his face partially concealed by a Union Jack bandana, the challenger also launched a series of insults at the champ" and later even "spat water in the face of his [Klitschko's] brother Wladimir just before the title bout," as reported by RT on February 18, 2012. Then, two days later, Dereck Chisora engaged in a "bloody brawl with David Hayeion" (another black Briton) in a post-fight news conference, as reported by BBC Sport on February 21, 2012.

The second illustrated example is that the black boxer Floyd Mayweather engaged in racial slurs against his opponent Manny Pacquiao (a Filipino) in 2010 when he said "we're going to cook that yellow chump with some cats and dogs," which is to make "a stereotype statement about Asians eating cats and dogs," as "it would be like seeing a black person in a high class restaurant and asking if they would like watermelon, pigs feet and fried chicken, that would be a very offensive assumption," as reported by Charlie Knoxvilleffe in February 21, 2012.

Earlier, Mayweather also insulted white folks by saying that "mixed martial arts is for beer-drinkers....You do that with animals, you don't do that with humans....And...there's no white fighters in boxing that's dominating, so they had to go to something else" like mixed martial arts where white guys perform better. Then, in February 2012, when Jeremy Lin (an Asian American basketball rookie) helped the Knicks win in several consecutive games and later earned several honors, like "two straight Sports Illustrated covers," which can only be compared with such basketball greats like "Dirk Nowitzki and Michael Jordan amongst NBA idols," Mayweather dismissed the Asian by saying that Lin is getting "all the hype" only "because he is Asian"; all this then led UFC president Dana White to suggest that Mayweather is in fact a black "racist."

The third illustrated example is that Jason Whitlock, a black Fox Sports columnist, commented further on Lin, in "the wake of Jeremy Lin's brilliant 38-point performance against the Lakers" on February 10, 2012: "Some lucky lady in NYC is gonna feel a couple inches of pain tonight," which of course is an offensive "racial stereotyping" and an insult to Lin himself, as reported by Kelly Dwyer on February 13, 2012.

And the fourth illustrated example is that Serena Williams, a black tennis player, insulted chair umpire Eva Asderaki (a white) after her violation of the "hindrance rule" against her opponent Sam Stosur on September 11, 2011, and threatened Eva when she said to her: "If you ever see me walking down the hall, walk the other way. Because you're out of control. Totally out of control. You're...unattractive inside," as reported by Chris Chase on the same day. In fact, Williams also insulted another chair umpire Louise Engzell (a white) earlier in a 2009 tennis tournament. These insults made a lot of tennis fans upset; for example, tennis commentators Mary Carillo and Tim Brando described such behaviors as unacceptable in the tennis world. To make things worse, Richard Williams, the father of Serena and Venus Williams, had often called the tennis world as "the lily-white tennis world" and at times called white players bad names; for instance, as he once told the Deccan Herald: "Well, I'm Black and I'm prejudiced, very prejudiced. I'll be always prejudiced as the White man. The White man hated me...and I hate him. That's no secret....[I]f you get some little White no good trasher in America like Tracy Austin or Chris Evert [two white tennis greats] who cannot hit the ball, they will claim this is great," as reported by Larry Brown on March 20, 2008.

Surely, there can be many other examples too, so the ones above are illustrative only. It is important to note that the National Association for the Advancement of Colored People (NAACP), an African-American civil rights organization, did not do anything when all these black racist incidents occurred against non-blacks. Such black leaders like Jesse Jackson and Al Sharpton did not make any condemnation against these blacks for what they did. But should all these racist incidents were to occur by non-blacks against black folks, there would be immediate condemnation and forceful actions by NAACP against the individuals and organizations involved.

These behaviors by black folks and organizations well illustrate the point that the behaviors and mindsets of these black folks have contributed to anti-black racism in the first place, in that blacks, on average again, are not commonly perceived as that intelligent or refined, when contrasted with whites or Asians, except in those areas where they dominate, especially in those endeavors which are physical, sensual, comic, and the like - but not intellectual and refined.

After all, black Americans, on average again, do not need the affirmative action program in those endeavors (where they do well, like sports and entertainment, for example) but time and again resort to hard tactics (like legal actions, mass protests, and riots) to pressure others to give them what they cannot achieve by competition in those endeavors which require more intellectual and refined abilities.

An excellent recent example in the U.S. is none other than a current (still ongoing) case closely watched by black civil rights activists, which is "the largest class-action lawsuit of its kind against an entire state government's civil service system," when "an Iowa judge will soon decide whether to grant thousands of black employees and job applicants [6000+] monetary damages for hiring practices used by Iowa state government that they say have disadvantaged them. The plaintiffs...argue that managers subconsciously favored whites across state government, leaving blacks at a disadvantage in decisions over who got interviewed, hired and promoted," as reported by Ryan Foley on February 17, 2012.

Something is fundamentally wrong in the current racial politics in the Western world, especially in America, where there is the popular belief in "these truths to be self-evident, that all men are created equal" (from the Declaration of Independence in 1776). But there are two serious assumptions that the American Founding Fathers had made, namely, first, that "men" are "created" (as a questionable theological assumption in Creation Theory), and second, that "men" are born "equal" (as a questionable biological assumption in modern Western social contract theory).

But for those who reject both Creation Theory and modern Western social contract theory, these truths are not self-evident at all and can be quite absurd (or false) indeed, when checked with reality. Precisely here, the historical one-sided excellence of black folks in non-intellectual endeavors (like sports, entertainment, and the like) and their behaviors and mindsets in the examples above can reveal something about the inequalities among different groups, such that each excels in some endeavors but not in others. So, in the end, there is simply no perfect race, no perfect ethnicity, no perfect sex, and whatnot, and each group, on average, achieve relatively better in some areas but not so in others (as this is something that I already went to great lengths to explain in my book "Beyond Nature and Nurture" in 2006, among other arguments).

In the end, both racists and anti-racists go to two different extremes, and it is time to transcend them all into the world "beyond nature and nurture" in the debate on human equality and its opposite.