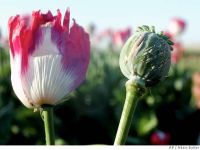 The Taleban government in Afghanistan was fighting against the production of opium and had greatly reduced it. With the collective resources, armies and wisdom of NATO's 40 nations firmly entrenched in the country for over a decade, the findings of the latest UN Report are a disgrace.

What NATO wanted in Afghanistan we all know and this was very clear to all before the Mujaheddin were launched by the FUKUS-Axis (France, UK, US and Israel) in the 1970s to destabilise the only socially progressive government Afghanistan has had, providing good governance for all citizens, including women and children, in an inclusive society devoid of gender-based exclusion.

The FUKUS-Axis, as usual, could not have cared less about human rights, women's rights or children's rights, as it launched the Mujaheddin through the Pakistani Madrassah, armed, aided and abetted them and threw them into battle against the Soviet Armed Forces. When the Mujaheddin morphed into the Taleban movement, women's rights were suppressed but so was the production of opium.

Under NATO, the drugs barons apparently have a free hand to engage in what they know best - how to produce as much heroin as possible to flood the streets of our cities, enriching the handful who control this evil trade. The basic and fundamental question is, what is NATO doing to stop it? If we take the latest UN report as a guideline, the answer is precious little.

In fact, reading the 2011 Afghan Opium Survey, it is hard to believe NATO's military and political leaders are cringing and bowing their heads in shame, rather that they must be rubbing their hands in glee. The results are utterly unacceptable and wholly scandalous: the joint survey made by the UNO and the Afghan Government reveals that the farm-gate receipts for opium in Afghanistan are around 1.4 billion USD, 9% of the GDP of the country and a 133 per cent increase over the previous year. Total export earnings from opiates for Afghanistan are worth 2.4 billion USD, or 15% of GDP. In the words of the UNODC (United Nations Office on Drugs and Crime) Executive Director Yury Fedotov, "Opium is therefore a significant part of the Afghan economy and provides considerable funding to the insurgency and fuels corruption."

Afghanistan produces 90% of the world's opium, covering 131,000 hectares. For those who will cry foul and claim that the income revealed in this document is not due to higher production, but rather to higher prices, the fact remains that according to the same UN report, the area under cultivation increased by 7% in 2011 compared with 2010 and the quantity produced rose by 61%, from 3,600 tons to 5,800 tons.

Yury Fedotov concludes: "The Afghan Opium Survey 2011 sends a strong message that we cannot afford to be lethargic in the face of this problem. We thank the Government of Afghanistan for the leadership and dedication already shown, but a stronger commitment from a broad range of national and international partners is needed to turn this worrying trend around".

If opium production is increasing by so much under NATO's watchful eye and if NATO has been there for over a decade, then we can only draw our own conclusions.