Iran, Hormuz and the law

Iran, Hormuz and the law 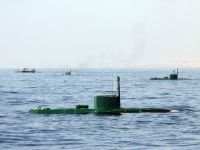 The FUKUS Three (France, UK and US) are getting worried. Certain sectors of the Iranian authorities have hinted that the Islamic Republic could decide to close the Straight of Hormuz. The reaction? Sabre rattling and cries that such an act would be "illegal". Interesting word, from these three...

Illegal? How interesting. What was the war in Iraq if not illegal? Did Saddam Hussein have Weapons of Mass Destruction, which posed a "direct and immediate threat" to the USA and its allies? OK then, where are they?

When the FUKUS Three, the two ex-colonial powers the UK and France and their former colony(ies), the USA, decided to attack Libya, how legal was that? Did they not flout the law by invading without a separate UN Resolution, as per the UN Charter, did they not break the law by invading without convening the UNSC Military Committee, did they not flout the terms of UNSC Resolutions 1970 and 1973 (2011)?

So isn't the word "illegal" a bit much coming from the three pariah states of the international community, two former imperial powers specialists in massacres and one monster, the product of the former two? Suppose instead of threatening Iran, they sat down in a civilised fashion and suppose they addressed the point that if Israel has nukes, then...