Perspective: The Russian elections and the US external policy 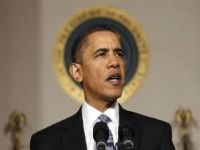 Not long ago, I thought that calling the United States of America "Public Enemy Number One" would be an unacceptable way to being an opinion article. Today, that is a fact after it becomes apparent that the USA has been directly involved in the opposition protests inside Russia after United Russia won a free and fair democratic process. Let us see.

Here are some soundbites spread across western media outlets: "It is scandalous and vulgar". "We have done our own calculations, and....I won". "We are really disappointed, we voted for the other candidate but this one won". Interesting. In fact these comments do not come from Russia, but from Africa, more precisely from the Democratic Republic of the Congo, where Etienne Tshisekedi disputed the election victory of Joseph Kabila, a continent where increasingly, election results are disputed and manipulated by outside powers, as we saw recently in the case of Laurent Gbagbo and the Ivory Coast.

However nebulous the election results from these two countries may have been (or not), Russia's are crystal clear, in an election process whose administration was, according to observers, efficient:

So where exactly is the problem? Do the USA and its poodles in Europe want the Communist Party to win? I thought they spent half a century deriding Communism as evil, and now they take the side of the opposition, whose main party is the CPRF? How interesting.

However easy it is to make a quick video, claiming "FRAUD!" and downloading it onto youtube, backed up by belligerent and intrusive arrogant remarks from the likes of Hillary "War Zone" Clinton who classifies a welcome with a band and a red carpet as stepping off an aircraft into the middle of a war zone, one thing is the accusation, another is an investigation into irregularities.

In a country as vast as the Russian Federation, however well organised the process is, it is perfectly natural that there will be issues, isolated incidents which may or may not alter a few details but certainly not a result in which the winner garners 50% and the second-placed party, 20%.

Regarding the protests, the Russian police have been congratulated this weekend on their management of the demonstrations fuelled mainly by the Communist Party and also the representatives of those who lost, three of these parties not managing to elect one single member of parliament. What does the USA then think, that these parties won?

Obviously, as in any country, protests and demonstrations have to be properly registered and policed and this was the case in Russia this weekend. Compared to the mass rallies in the 1990s, when hundreds of thousands of people turned out, this Saturday the largest peaceful and legalised demonstration had around 30,000 people, at most. In a population of 140,000,000...

Let us remember in July one million people (one fifth of the population of the country) turned out in the streets of Tripoli to march against NATO and its criminal murderous attack against Libya, and NATO then refused to allow the Libyan Government to hold a free and fair democratic election. So much for democracy, eh what?

Now for intrusion and I reiterate my claim that the USA is public enemy number one. There are claims in Moscow that the USA has been financing groups of people inside Russia to stir up problems. The figure of 500 Roubles per person has been quoted. Should this be the case, then how does the US taxpayer feel, how does the US citizen feel, (s)he who worked hard all his/her life to buy a house and has lost it in foreclosure, to know that thousands upon thousands of dollars are being wasted funding unrest on the streets of Russia?

Is the USA public enemy number one, or what?

And for those media outlets and hysterical politicians deriding the elections, has anyone bothered to check out the role of the USA's National Endowment for Democracy organization? It is funded by the US Government and among those involved in claiming that there was electoral fraud in Russia are those belonging to the NED's World Democracy Movement. One of these is Vladimir Ryzhkov, who appears on the Internet with a Washington DC address. Others were, according to reports, polling station monitors, paid to stir up problems.

In fact, many of these weird and wonderful creatures springing up inside or outside Russia's borders claiming how unfair the election process was, have direct links to the NED or other US-based or US-financed organisms, such as Neo-Con, Fortune 500, Henry Jackson Foundation, Moscow Helsinki Group, Strategy 31 and so on.

Let us take a look at GOLOS, a Russian election monitoring organization. Interesting, because on the US National Endowment for Democracy website, we read:

"Regional Civic Organization in Defense of Democratic Rights and Liberties "GOLOS"
$65,000
To carry out a detailed analysis of the autumn 2010 and spring 2011 election cycles in Russia, which will include press monitoring, monitoring of political agita­tion, activity of electoral commissions, and other aspects of the application of elec­toral legislation in the long-term run-up to the elections. GOLOS will hold local and national press conferences and publish reports on its findings, as well as pro­vide detailed methodological advice to its monitors and other monitoring agencies."

So, it seems that the allegations that the USA is intrinsically involved in the Russian Opposition's claims are true, to the tune of countless thousands of dollars. Oh well, as the US taxpayer struggles to meet the bills this Christmas, it's nice to know where your government spends your hard-earned tax dollars.

So yes, the United States of America is Public Enemy Number One. This is a country controlled by a clique of lobbies fuelled by the corporate greed of the arms, drugs and banking sectors, it is a country whose Vice-President and AIPAC wield more power than the President, neutered before he took office and a country which simply cannot mind its own business and sort out its own problems. Obama is a fraud, Hillary is the snake in the woodpile.

See Hillary, spit in the wind and...and Obama, you should be ashamed of yourself.