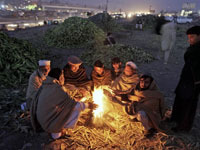 Pakistan has become a testing laboratory for adventures of super power in their frenzy to build a new Empire without learning from history. The world has seen only during last two centuries the doom of nearly a dozen empires and the logical end of their tyrant rulers who use to keep their subjects as hostages denied of their basic birth rights as human being, while their own pedigree use to live in royal moghul style. Britain claimed to have a written constitution and conventions had to trample this constitution, when it became an essential need.

When King Charles refused to sign the bill for change to provide relief to common men the parliament assumed the powers of the King by force of a resolution and passed the bill to behead the King to root out the demon of all the curses that were afflicting the peace and prosperity of Britain, there was no room for welcoming foreign emissaries or dictations acceptable at that time, which was leading to their own doom. The end of the famous French revolution in modern history is a lesson for those manipulating to acquire a throne that the French King was not only named as baker king but was sent to Guillitine, along with his wife and son. Why the West is using the same third degree methods to colonize the weaker nations in Asia & Africa again.

The demon of corruption is also due to the same machination of developed nations to win contracts by hook or crook to dump their surplus or to support and sustain their economic growth and prosperity that a country like Pakistan having a large land mass with abundant resources of water, manpower and energy with four seasons as gift of nature has been turned around as an economic and financial liability.

Pakistan during Ayub Khan Era was lucky enough to have a real true friend - Chancellor Erhard of Germany who fancied Ayub Khan and was willing to extend full support to build a sound economic and financial infrastructure and had suggested Bonus Voucher Scheme, offered to build a refinery in Pakistan and a Hydro Cracker project to acquire viability and sustainability. Then came in the Howard Group in our planning commission and till date they are saddled on the driving seat with different masked man of Pakistan origin also who take pride in serving their IMF & World Bank masters more than their own country of origin. Now we hear about the appointment of Mohsin Khan, a long serving staff member of IMF and a long time-tested friend of Deputy Chairman, Planning Commission to fulfill their agenda again. Hence we have fallen victim to their hatched conspiracy, inspite of a good start through five year economic plans and 20 years perspective plan many years ago, which Koreans had borrowed from us and see where we are today and where the Koreans are.

During the regime of Ziaul Haq the rat race to win mega projects contract was exposed to the extent that during Benazir Bhutto first tenure the Canadian Ambassador had written a letter to express reservation on not giving a contract to some Canadian bidder, which was publicized through the print media also and thus the ruling elite was shown the greener path to acquire wealth.

It was on account of this culture that we in politics committed to work for eradication of corruption and Prime Minister Mohammad Khan Junejo first created an Federal Anti Corruption Committee with General ® Majeed Malik as its Chairman, due to tussle of power with President, Junejo government was axed through the infamous law of 58 (2), b and when Benazir Bhutto was elected to rule on dotted lines the FACC was revived with Malik Qasim as its Chairman as well as Advisor to Prime Minister, but for a short time as her government was packed on charges of corruption within 22 months. Nawaz Sharif was elected as Prime Minister again to work on dotted lines, but was sent home due to machination of infamous troika now called establishment.

When Benazir Bhutto was elected to office for second term, FACC was revived to do the thankless job, which the rulers and those under investigation were not interested. My personal experience as Member, FACC was horrifying, the methods applied in corruption by high and small functionaries of state was nothing but broad day light dacoity of the national exchequer. My horrible experience was when I had before me the declaration of assets by Mian Nawaz Sharif and Mian Shabaz Sharif submitted to election commission after being elected as per law, when I matched the details of assets with the collateral pledged with bank as their assets to qualify for loan facility there was a triple fold difference in both statements.

So we prepared a reference for the Speaker National Assembly to process proceedings to unseat both brothers but after the news was flashed on media Prime Minister intervened not to submit this reference on the plea that more then half members of her own party will be de-seated as every one has applied the same method in declaration of assets under the law there was no one to scrutinize these declarations. When it was found that our civil bureaucracy is hand in gloves with politicians, we obtained the copies of annual declaration of assets by the senior bureaucrats; it was shocking to see that it was a few lines written that I hold assets worth few thousands only.

I prepared a 22 columns draft for declaration of assets by officers from grade 17 to 22 and after approval when it was circulated to all departments including Para military forces a commotion was felt in the government and federal secretaries with the consent of rulers came to bloc this, twice the matter came on the Cabinet agenda challenging the capacity of FACC to handle this voluminous job, which we resisted tooth and nail but in bid to save their own face the Cabinet decided that declaration will be submitted to Establishment division not FACC but the questionnaire will be drafted in consultation of FACC, what a mockery of law.

It is worth mentioning that Chairman and 12 Members of FACC were rendering services as a national requirement on gratis without any remuneration, and the annual allocation of funds for FACC used to be nearly Rs. 10 million or so, which was mostly spent of salaries of a battery of officials and staff from grade 22 to 5. That was more than 20 years ago; since then this malpractice has become even worse. Here I can not remain without endorsing the idea of Imran Khan demanding truthful declaration of assets with a mechanism of timely scrutiny by a credible organization to put the country on rail again.

Corruption and mis-governance in Pakistan has reached such high dimensions under the current government that it is threatening the very existence of our country. Some of the very important state-owned companies like the Pakistan Railways, which has abandoned 540 engines and carriages to cripple public means of transportation inspite of Loco shed, Carriage Re-build factories and what not already available in Pakistan, but commission Mafia under the very nose of government is ruling the roost.

PIA is deliberately being strangulated to justify creation of another private airliner with vested interest, and Pakistan Steel Mill has to be thrown to winds inspite of earlier intervention from the Supreme Court of Pakistan, Qadirpur Gas field and other sources of natural gas are destroyed in a bid to justify import of gas from Qatar and pocket money for the deal in the name of building floating and stationary jetties around port Qasim in Karachi. Punjab Bank and NICL corruption cases, IPP's and Rental Power projects inspite of FIA functionary Mr. Zafarullah Qureshi doing a yeoman job has been made a scape goat while the real culprits are living honourably. KESC, Wapda, Railway, and many other organization extended stimulus packages are despite huge infusions of taxpayer's money as bail out package stand close to collapse.

There are hardly any railway destinations left functioning due to the bad state of repair of the engines and the railway system while the employees and pensioners of the company are left suffering and dying in the street while waiting for their due payment. The same can be said about PIA which has narrowly escaped accidents because of the poor standard of repair and maintenance of their aircraft fleet. There is no money to buy spare parts but there is money to pay bribes and for the management to enrich itself. Instead of looking for relief the current government is wasting more money for their own comfort and for keeping themselves in power by creating new ministries to provide ministerial posts to their clients and coalition partners for keeping them in line.

While the global anti-capitalist movement that started with the anti-Wall street agitation in the centre of capitalism US has reached Pakistan it seems that there are more pressing issues right now in Pakistan: that is addressing rising corruption, bad governance and poverty in the country? The rally of Nawaz Sharif's PML(N) which took place under the motto of 'go Zardari go' and the recently published program of this party which was meant to line out alternative policies to save the country is not offering any credible solution to the pressing problems.

As a matter of fact, the Sharif family itself and many of their followers have made money in the past through questionable means and nobody can explain why they would stop doing so in future. Nawaz Sharif's previous rules in 1990 to1993 and 1997 to 1999 were not less corrupt than the intermingling PPP governments though the current one is topping them all. Would the Sharif family want to fight corruption regardless of family or party affiliation of the corrupt? That would be believable only if they started by clearing their own assets, by returning the stolen money after bringing it back from abroad.

The PPP government's policy at this stage seems to be to keep people at home in order to de-politicize the situation while everybody is sitting at home, sleeping, chatting and enjoying. Closing down the markets in the evening and keeping two holidays a week are surely no way to improve economy or for better and more efficient governance. Now there have been announced a host of holidays on the occasion of Eid ul Azha, can a collapsing economy afford such luxury?

These attitudes and policies of the rulers are showing a clear lack of understanding of the problems or will to change them. A new attitude is needed by those who are really interested in solving the burning issues of poverty, mismanagement and corruption and this new way is not to be found within the structure of the existing parties who are all dominated and financed by a corrupt elite of feudal families whose power and influence depends on the perpetuation of the current state of affairs.