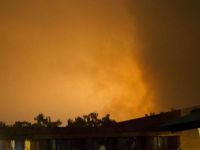 Despite the smugness and arrogance on the smirking face of David "If I have to pay anything back, then I shall" Cameron, the Libya escapade has been yet another geopolitical disaster for NATO, destroying the credibility of the organization once and for all and rendering its leaders liable for prosecution for war crimes.

The five-letter word Libya will be branded across the forehead of NATO and its military and political leaders for the rest of eternity, since due to the increased powers of communication which come with the internet, out goes the notion that the victor writes the pages of the annals of history.

Libya is a disaster not only for NATO but also for the political leaders of the FUKUS three, the three-pronged assault on human decency provided by France, the UK and (who else?) the US.

For a start, what happened in Libya cannot and must not go unsaid and must constitute the basis for a prosecution of the Organization, the International Criminal Court at The Hague for perversion of justice, and of course the military and political leaders of NATO for war crimes, occasioning murder, instigation to murder, attempted murder, grievous and actual bodily harm, wanton destruction of property (public and private), criminal damage, vandalism, breach of the UN Charter, breach of UN Resolutions 1970 and 1973 (2011) covering the incident, breach of the Geneva Conventions, breach of all the norms in diplomatic custom, customary and international law.

This massive and clear breach of law and violation of human rights could not be more serious or have deeper implications for the legacy of Cameron, Sarkozy and Obama, whose callous and total disrespect for human life and absence of human feelings was so apparent when they refused even to apologise when the grandchildren of Colonel Gaddafi were murdered in a NATO terrorist strike on a private home.

The names David Cameron, Nicolas Sarkozy and Barack Obama could be synonymous with the names of the children their forces murdered in cold blood: child murderers. How would they feel if the same thing happened to their families? Would they sit smirking?

On a less personal level, the political credibility of NATO has once and for all been destroyed, as if after Iraq anyone had any doubts...destroyed to such an extent that the geo-strategic capacity of this evil organization has seen a shift away from its control. After Libya, it is clear what NATO is, and therefore its very existence is an insult to its founding principles, an insult to international law, an insult to human dignity.

NATO, it is clear, is an organization which panders to the whims of the lobbies and cliques which gravitate around the White House, dictating its policy, and, in the words of the White House itself, involving its NATO neighbours to reduce the financial load on the US of A and save the lives of American boys.

In Libya, NATO protected civilians from terrorists by bombing them, unleashed the most horrific elements from the dregs of Libyan society - terrorists, rapists, murderers, looters, arsonists, vandals, torturers - on the citizens of Libya, together with vandals from abroad, flown in from other theatres of war where they had been combating NATO forces. So many were they, and so high were the casualties against the heroic Libyan Armed Forces, that some observers say NATO threw them into Libya on purpose, so that many of them would die, and therefore pose less of a risk to its schemes elsewhere in the future.

Finally, NATO's actions in Libya have sent a very clear message to all that the last thing you do is get rid of your Weapons of Mass Destruction, since this cowardly organization only attacks those who cannot defend themselves and when they do not have the weaponry to reply. That makes the world a much more dangerous place, and for this reason NATO and its leaders have no further part to play in the destiny of Humankind.

Libya was indeed NATO's grave in the hearts and minds of the international community and in future, its "mission creep" policies of lying about its intentions from the outset will ensure that its plans are never approved in the UN Security Council, pushing the world one further step towards the brink of tension and eventual conflict.

NATO is A Terrorist Organization and must be stopped. Now. Therefore in conclusion, whatever the outcome with Muammar al-Qathafi, as NATO exits Libya with its tail between its legs, hated, knowing it cheated...Gaddafi 1 NATO 0. In Libya, NATO lost far more than Gaddafi and Gaddafi, a hero, won more than NATO could ever gain. After all, you do not win a boxing match by having 15 fighters in the ring armed with machine guns and you do not lose by standing up to them for eight months, alone.