To the seven billionth inhabitant: Welcome to our wonderful world 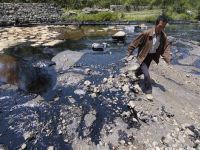 The UNO forecasts that in five days' time, inhabitant number seven billion will be born. Let us collectively take a look at what he or she is coming into and in so doing, examine whether we are heading in the right direction or not. If not, suppose se did something about it instead of sitting around in forums wasting time?

Welcome inhabitant seven billion. I hope they give you a name and not the number 7B. Well, let us take you on a grand tour of the "estate", our home. Collectively, we have been here for around three million years. The story goes that Lucy was our common ancestor but after that, despite our advanced state of knowledge, things get hazy. Some say we all walked out of Africa and into Asia, where we congregated in Northern India speaking Sanskrit then all branched out from there to different places.

The history of evolution of other species would indicate that this approach defies logic, and that we all sprang up in different places in different times. Whatever, one thing is certain: each and every species alive on this planet has learnt what when they come anywhere near humankind, the first thing they do is run away as far and as fast as they can, rather than approaching us in friendship. For some reason it must be.

Collectively, we have decimated thousands of species and continue to do so every day; our subsoil is full of the graves and bones of literally millions upon millions of human beings, slaughtered because they were the wrong colour or race or followed the wrong creed or said the Earth was round or were gay or Greek or stood up for their rights or were slaves or Jews or Arabs. Or Goths. Or had larger ears than their peers.

In three million years, we have destroyed vast swathes of our planet, insulting Mother Earth to the core, destroying her forests and fields and the secrets held within them, massacring animals and birds, cutting down rainforests which were homes to thousands of species for millions of years. Yet it was not enough to pollute the land. We then started to poison the rivers and seas and coral reefs, filling the Oceans with plastic debris which floats around, the size of half of Europe, between Africa and South America.

We leave our nets in the seas for marine creatures to get entangled, we hunt dolphins with machetes and hack their noses off when they are alive, we murder whales for "research", we use underwater sounds which disorientate whole schools of these wonderful animals; this, when we are not filling the sea with toxins, leaving seals with horrific burns or else pouring oil into them, coating fish and birds alike with poisonous sludge.

After three million years, we have yet to implement a system of international law which functions. Just this year, in February, a plan was set in motion to seize the assets of Libya, a country until then living in peace, until an evil clique of war-mongers named NATO armed and aided groups of terrorists to start massacring people on the street, cutting the throats of Negroes, raping women, torching Government property, looting and ransacking homes, then when the Libyan Government tried to restore order, NATO broke every law in the book by taking sides, bombing the Libyan authorities to install these terrorists in power. In so doing they broke the rules of engagement, they broke the UN Resolutions covering the conflict, they broke the UN Charter, they broke the Geneva Conventions. International law is not implemented, therefore it does not exist. After three million years.

They murdered civilians, they used military equipment to strafe water supplies and electricity grids, they murdered children. Yet instead of hanging their heads in shame and at the very least, admitting they were wrong, they crow victory.

After three million years, universal women's rights do not exist. Just recently, in Iraq, a country where women had been free to live as they wished, the same NATO cabal installed an Islamist Government which empowered husbands to beat wives who "misbehaved", then the same NATO forces tortured civilians in prisons, urinated in their food, deprived them of sleep, waterboarded them and sodomised them. Women were decapitated and had their throats slit because they refused to wear the veil.

Collectively, we have discovered how to reach space, we have discovered how to transmit messages and images in real time across our planet, we have invented mechanisms to destroy our world, killing every living being in it but we have not yet eradicated preventable diseases, clean water does not run in every home and he who installed tele-medicine and e-learning systems across Africa has just been murdered because in so doing, these Africans would not be paying massive interest repayments to western banks.

We have seen several holocausts, in which millions of human beings were treated with abominable cruelty just because another group exercises power over them. The first such incident was the Negro Holocaust, called slavery, which is estimated to have affected seventy million Negroes, sold to sugar plantations and farms in Europe and where Europeans inhabited; the second was more recently, when a Fascist regime in Germany and Austria (with ramifications in Poland, Romania, Czech Republic, Hungary and the Baltic states) set up concentration camps to incarcerate and later incinerate Jews, gypsies, Negroes, gays and anyone they considered non-Aryan.

Dear seven billionth citizen, if you are as yet a spermatozoid, just avoid the egg and be done with it; if you are an egg, then fight the spermatozoid off with all your might and just give up there and then. After all you have already given someone an orgasm. If you are already fertilised, and if your host does not choose to abort you because she or her partner feel they have that right, welcome to our wonderful world.

After three million years, you do not have an education or healthcare or a job or a home as a birthright, anywhere; you might be raped or have your clitoris cut off if you are a girl, you might be sodomised because you are a boy, you might be sold into slavery (still) or as a sexual object or as a child soldier. The countries which abhor these practices, considering them barbaric and labelling themselves as civilised, are precisely the ones that belong to NATO. So there is no way out.

Personally, I feel ashamed to belong to Humankind and I apologise to Mother Nature for the horrific insults my fellows have committed past and present...and no doubt in the future. Let us hope you, if you survive, can make a difference.