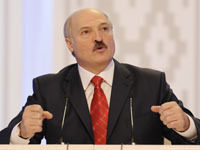 Pravda.Ru asked expert opinion from the chief of the Department for Belarus of the Institute for the CIS, Alexander Fadeev.

"I'd like to say here that the Belarusian authorities previously tried to control the Internet by restricting access for people, but those attempts did not prove to be effective. For example, it goes about the requirement to show passports when visiting Internet cafes and so on. Belarusian officials realize now that people can get the information that they need if they try. It is very hard to cut access to information nowadays.

"Those forces that pinned their hopes on the opportunity of "Internet revolutions" in Belarus believed that the ongoing economic crisis in the country would help them. Needless to say that Belarus does not have such trump cards as natural resources. We have to point out the mistakes that the sitting administration has made so far.

"The Belarusian currency has lost 89 percent of its value as a result of the crisis. Independent experts name a different number - 200 percent. The inflation rate in Belarus is expected to exceed 100 percent as of the year-end. Prices on essential goods and food products have grown considerably. The situation has been extremely intense recently at this point.

"However, the colossal impoverishment of common Belarusians has not led to mass protests. Those people, who wanted that to happen, did not take account of the Belarusian mindset. It is absolutely normal for the majority of the Belarusians to scold the authorities at home in the kitchen. They don't take to the streets to do that.

"Many people found a way out of the problem - the labor migration, as it happened during the 1990s. For example, there were as many as 500,000 Belarusian labor immigrants working in Russia during the 1990s. Some 200,000 more came to work to Ukraine. This trend has been getting stronger recently. You can come to the Belorusky Railway Station in Moscow and see it for yourself.

"Many Belarusian people come to Russia for earnings now, and Russia is happy to welcome them. The majority of those people are highly qualified specialists. As you can see, the Belarusians prefer not to protest. They go somewhere else for earnings.

"The West has taken a lot of effort to destabilize the situation in Belarus. The entire Belarusian opposition is supported by the West, especially by the European Union. I can even give you the names of the countries that are involved in this process most. They are Lithuania, Poland and the Czech Republic. The majority of Belarusian immigrants of the opposition live in those countries. They used the Internet to struggle against Lukashenko's regime. But they also used the Internet to receive financial help from the West.

"The opposition of Belarus has not been able to achieve anything in nearly 15 years. They have no unity. Many opposition activists are not ethnic Belarusians. They are Poles or Lithuanians. They have narrow interests so there's no chance to count for success. This is presumably pro-Western and Russophobic opposition. There are no pro-Russian opposition activists there. There is also a weaker part of the Belarusian opposition - the nationalist part. They hope that Belarus will be able to do without the West and Russia, but they have no chances for success.

"The Belarusian opposition has the same leaders for more than a decade already. What makes them better than Lukashenko? It appears that the West has been disappointed with the carriers of the "Belarusian democracy."   The EU and the USA already try to find other opportunities for destabilizing the situation in Belarus.

"The state of affairs in the country may change, of course. One may say that the changes are not going to be positive for the sitting administration. Lukashenko should not ignore the danger that comes from the Internet."