Daddy is not a nice person: The legacy of Cameron, Obama and Sarkozy 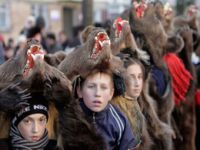 Let this article serve for posterity, so that future generations, including the children and grandchildren of these three politicians can read these lines and judge for themselves the difference between what this demonic axis has done in reality and the nonsense they will spout forth in their memoirs. The bottom line is Daddy is not a nice person.

Yes, we can just imagine it. In ten years time, David "If I have to pay anything back, then I shall" Cameron, Nicolas "I hate gypsies and drug addicts" Sarkozy and Barack "Hey I do what I am told" Obama will be preparing their kids for adulthood by advising them which Universities to go to, getting them into the best internships and telling them what Daddy did when Daddy was Prime Minister/President.

We can all predict the rosy-coloured nonsense which will grace the pages of their auto-biographies and memoirs as they pass on to the "chicken run", the lucrative after-dinner speech circuit during which they preen themselves and glorify their legacy, however sickening it may have been. Very often, the repression of the truth and the tension this engenders creates imbalances in the body which can give rise to cancers and other stress-related diseases, as explained through the science of bio-synthesis.

So let us examine the legacy of Cameron, Obama and Sarkozy, three men in clear need of decades of therapy. Basically, these evil three have insulted the collective history of humankind and have attempted to render useless the good work of millions of people throughout the centuries who were working towards a better and fairer world based upon the rule of - and respect for - the law.

Daddy/Grandapa is not a nice person. These three men broke international law by supporting terrorists, invading Libya and bombing civilians (to protect them?), supported carpet-bombing strategies against the poor civilians defending themselves against the marauding gangs of terrorists that they unleashed, they supported a policy which targeted civilian structures with military hardware.

Daddy/Grandpa is not a nice person. Cameron, Obama and Sarkozy supported a military policy which destroyed the civilian water supply so that mothers could not bathe their babies, they supported a military policy in which the electricity grid was taken out "to break the people's backs" and so that patients in hospitals would die because their electricity supply was turned off, families could not heat their homes.

Daddy/Grandpa is not a nice person. Cameron, Obama and Sarkozy supported a policy in which schools and hospitals were bombed. They supported a military strategy which strafed a family home, murdering one of the sons and three grandchildren of Muammar al-Qathafi. And you know what? Not one of these three even apologised. Daddy/Grandpa supported child murderers and did not even have the decency to say sorry.

Daddy/Grandpa is not a nice person. Cameron, Obama and Sarkozy targeted Libya because Libya and its Brother Leader stood for a unified Africa, providing Africans with African solutions for African problems, freeing Africans from the yoke of paying crippling repayments for loans from the banks their countries controlled.

Their entire policy was based upon greed and selfishness, murder and theft as they backed torturers, they supported racists, they financed rapists, they aided terrorists, they sustained murderers, endorsed the actions of looters, thieves and arsonists, they gave the nod to those who desecrated cemeteries, dead bodies, who slit people's throats in the streets, murdered children and sodomised the dying. If Daddy/Grandpa ever asks you if you want to know what his legacy is, then just tell him to do to you, a fraction of what those he supported in Libya did to their victims. See, Daddy/Grandpa is not a nice person.