Open Letter to the NTC in Libya 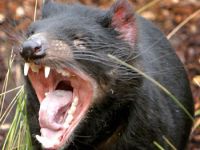 I cannot address you as "dear" because my human dignity refuses to allow me to address you with a term of endearment, given the inhumane, monstrous, demonic and despicable behaviour of your hordes over the last few months since February.

This letter does not mean that the struggle between good and evil in Libya is over, for evil is always evil and good always wins. The coming months and years will show very clearly what happens when foreign powers try to install bands of terrorists, rapists, racists, murderers, looters, arsonists, torturers and vandals by force.

To begin with, declaring a state of peace just because you have announced that Muammar Abu Minyar al-Qathafi was caught and killed is meaningless, for the people of Libya did not elect you, neither has there been any electoral process, nor by your behaviour have you deserved anything but deep and utter contempt by all decent human beings.

You see, to cohabit with and be considered as human beings, and not terrorist filth, you have to act like human beings and what we have seen from your gangs of rapists, torturers, murderers, arsonists, thieves, looters, racists and terrorists since February are nothing other than the most despicable outrages against the human condition and human dignity.

Therefore no human being will ever consider you as members of the international community unless there is a free and fair election in Libya which includes the right of the Jamahiriya system of government to present itself. Unofficial polls give to the Jamahiriya, if it is allowed to be a political party, something in the region of seventy per cent of the vote, which would constitute a massive overall and absolute majority and a crushing and humiliating defeat for yourselves, who would, upon the practice of universal suffrage, be swept from the face of the political scene. Should that be the case, would you disappear quietly?

In stating that a new era is to begin, you are saying that fighting has ceased. Why then did the international media concentrate of the celebrations yesterday in Benghazi and not in Tripoli, where only a handful of people turned out to the rally? And sooner or later you had better get the "Gaddafy dead" story right, because so far it is as risible as it is puerile:

We have him captured in a drainpipe in Sirte, dry, when the city was suffering its worst floods for decades; the murderer who is supposed to have shot him now says he found him in the street walking with children and girls, then shot him because he didn't feel like taking him alive. Then the other story was he died in a firefight between his supporters and your terrorists in Sirte, then in a firefight on a pick-up truck in Sirte, then he was lynched by your demonic mob, then he was bombed by NATO, then he was killed in an ambulance on his way to Misurat. Get the (f...reakin') city right, for God's sake! The body was at first declared not to be that of Muammar al-Qathafi (where is the scar from his appendicitis? What happened to his body hair? Why did a seventy-year-old body look like that of a 45-year-old? Why was his hair brown and not black?) and then half an hour later it was.

Conceding that the body was that of Muammar al-Qathafi, if only to allow his family to mourn in peace, then how dare you insult the good image of Islam and drag your religion down to the demonic level by parading a body in public - for children., above all, children, to see and take photographs of. What is wrong with you? Are you the spawn of Satan, or what? In fact it does not surprise me one bit because I know who you are, I know what you have done and I shall take pleasure in revealing to the world exactly what you are.

Destroying records will do you no good, they have already been copied and stored electronically and if you are ignorant enough to believe that these days a record ends with the destruction of a piece of paper, then you are even more pathetic than I thought.

As for the rest, we shall see what the Libyan people do and to what extent they accept you. Should the resistance continue, then it would appear that you are not that popular, would it not?

For the record, let us register here what Muammar al-Qathafi brought to Libya and let us judge you by what you bring. He inherited the poorest country in the world and turned it into one of the richest in Africa. He provided Libyans with literacy and a free education, and then paid for University grants. Ten per cent of Libyan students studied abroad, in Europe and the USA, paid by the state and with board and lodging paid so do not insult our intelligence by saying Gaddafi was an anti-West dictator. What dictator educates his people?

He gave each married couple 50,000 USD to settle down, he paid for half the first car, he provided interest-free bank loans, he provided free medical assistance, he built the world's most advanced irrigation system, bringing water to most of Libya, across the desert; he provided farmers with land, seeds, tools and instruction.

He inherited the poorest country in the world and gave it the highest Human Development Index in Africa. He helped free Africans from the yoke of imperialism and colonialism, he provided Africans with satellites to free them from crippling payments to western systems, he set up loans so that Africans would be freed of paying for the rest of eternity to foreign banks. He paid revenue from oil directly into the bank accounts of the Libyan people

For these reasons Muammar al-Qathafi is a hero in the hearts and minds of millions of Libyans and in those of yet more countless millions around the world who have read his Green Book and who will take up his Legacy to study the Jamahiriya system and make his writings compulsory reading for all.

You got off to an excellent start. By declaring Sharia Law, you have alienated the vast majority of the population of the European Union - 500 million people, almost all of the United States of America, Canada... and by behaving the way you did, desecrating a human body in that way, acting like terrorists and murderers, then you have just insulted Islam to the core and do not deserve to represent Moslems.

Well, your political epitaph will be written by yourselves. I would bet that within a very short space of time, you all start fighting among yourselves and I would be surprised if many of you survive long enough to make any difference at all. What is it you say? Allahu Aklhbar. More fundamentally, your success or failure will depend on the people of Libya once your friends in terrorism, NATO, has given up and gone away, for Cameron is spending far too much of his taxpayers' money bombing Libyan children...but then again, you really could not care less could you?

What type of snivelling coward calls in foreign armies to fight for him? For the record, your bands of lunatics, fanatics and rapists would not have won one single engagement without NATO's massive terrorist bombing strikes, not one. So cut the false bravado, you know very well that once NATO goes and if the Libyan people do not want you, you will be destroyed within a fortnight.

That means two weeks, the same time it will take you to read this letter no doubt, if indeed you have not asked someone educated by Gaddafi to read it for you.

Remember, any electoral process without the Jamahiriya being given a chance is considered void in the hearts and minds of the international community. As for your partners, NATO, a lawsuit is being drawn up for them, for their war crimes. I shall then see whether I decide to draw  one up against yourselves.

That would be all. I am not going to use a closing statement because I only close a letter with respect to whom I consider at least as fellow human beings.