Open letter to RATO (NATO and its RAT mercenaries) 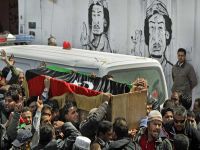 To NATO: Stop trying to lure poor and unemployed young men from Egypt, Tunisia, Pakistan and Afghanistan into your sickening western crusade into Libya, stop sending these young men to their deaths, stop lying to them about how much they will be paid and stop using foreigners to fuel your horrendous selfish oil wars in Libya.

I never thought I would feel any pity for the RATS NATO is employing as mercenaries (against international law) in Libya. But now I address the young men who are being lured into this trap, promised thousands of dollars...to get killed and if not killed, return home unpaid. In a wheelchair (rented by NATO no doubt at a huge repayment price). Paralysed. NATO is bankrupt and thousands of mercenaries in Libya have stopped fighting because they have not been paid for weeks.

The fact of the matter is very, very different from the nonsense that NATO and its bought media is putting out. When NATO or its contractors contacts you, it is telling you that it will pay so much per day, so much per week or so much per month, promoting freedom and democracy in Libya, rebuilding a nation and participating in a new modernisation process, which in the future will have many future avenues for employment. The nation in question is Libya, whose Jamahiriya system was and is and will be the most democratic system of governance that has ever existed and let's be honest, whose population has been perfectly happy with the excellent standard of living Colonel Gaddafi provided.

What NATO is not telling you is that once you are sent into battle, on the ground, you are alone. Alone because NATO cannot place boots on the ground in Libya (OK everyone knows they do, everyone knows that governments do not comment on Special Forces involvement and everyone knows the families are also sworn to secrecy. Yet ask the growing number of British families whose loved ones have disappeared, ask the growing number of American families. Only this week 383 bodies of US Special Forces and Airmen were recovered by the Libyan Authorities from Ras Lanuf where the 82nd Airbourne Division suffered a tremendous and humiliating defeat, complete with Hercules aircraft blown up full of those who were sent to kill). What, didn't the US press report on this? But when the going gets hot, they run and send you forward. After all, they say you are going to get paid so you have to do some work...

What NATO is not telling you is that you will not be paid one cent, basically because NATO does not have any money. In Britain for instance, David Cameron is lecturing his population on how to handle their finances while he himself blows two billion pounds on this murderous imperialistic adventure because his friend Sarkozy needs cheap oil to fuel his economy and because he inherited a Government compromised with placing the Libyan opposition into power so that NATO could recolonise Africa. But the FUKUS (France, UK, US) is bankrupt.

What NATO is not telling you is that you are being sent to your deaths by this callous organization whose respect for human life is quite obviously zero. How any Moslem or Christian could work for this organization is beyond logic...it is like selling your soul to the Devil.

What NATO is not telling you is quite how many of you are being killed. The Libyan Armed Forces are very well trained, better than the NATO special forces, and are extremely well armed, and they have resources to last them for decades. The 150,000 of your brothers who lie rotting and stinking in Libya's streets and infesting its sands bear witness to the veracity of this article. That is the sickening truth. NATO has no respect for you, its military leaders are laughing behind your backs because your deaths are saving westerners from dying and NATO's political leaders do not even know you exist. In the last week, 7,000 RATO mercenaries have died. Most were from Egypt, Tunisia, Pakistan and Afghanistan.

Remember, in going to Libya, you are fighting as mercenaries for a foreign force in favour of the greedy self-interests of the FUKUS countries: oil. You are also fighting against good Moslems and against people who will rightfully defend their country. When your home is invaded, you do not hand the robber the keys, now do you?

Instead of signing up for the Devil trying to lure you into this trap, do yourself and thousands of your brethren a favour: treat the person trying to sign you up as you would treat the Devil. Do the decent thing. Don't let yourself and your family be raped by NATO.

Photo: Guess how many of these people are Libyans? Or Pakistanis? Or Afghans? Or Tunisians/Egyptians? And in this case, spot the British and Americans... On the wall, racist references to Muammar Gaddafi as a "black" with a banana. This scourge has promised to rid Libya of Negroes. Obama, Cameron and Sarkozy support it.