The one killing civilians is NATO 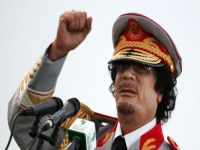 So much for Colonel Gaddafi bombing his people - this has been proved to be wholesale fabrication, fantasies belonging to cloud cuckoo land, yet bandied about as the "truth" by supposedly reputable media outlets. Their credibility, along with NATO's, has been lost under the sands of Libya, whose heroic people continue to resist these satanic forces

Start the violins: The people of Libya, uneducated and oppressed, who had to go abroad for healthcare, didn't have jobs, didn't have food, held down by a corrupt regime, rose up against an evil dictator and (sobs) helped by the heroic pilots of NATO, which followed all the rules, did not equip the "rebels" and did not put boots on the ground, (raise the volume) they took power. "Gaddafi" is now a fugitive and (crescendo) the remnants of his "regime" crumble like his "compound" did. Stop the violins. CUT!

Offstage left: a voice in a megaphone yells BULLSHIT! A stunned silence. The westerners in the audience fidget in their seats, some bald pates are glistening in embarrassment. Men look shifty and uneasy, some women are close to tears. Enter front stage the commentator.

Ladies and gentlemen I am sorry to say that some of you are not going to like what you hear, but I am going to say it anyway. Those of you who feel uncomfortable with the truth can leave by the rear exit where you will find the WCs and those newspapers you like to read piled up beside the toilets. Background noise is provided in there by the compromised TV channels. Now for those who are interested... here is my story...

When your house is burgled and you catch the burglar inside, what do you do? Do you simply give him the keys and say OK I will not resist, it is all yours now? I don't think so. I think you grab the nearest weapon you have to hand and smack him as hard as you can over the head, preferably on the temple and at the very least put him out of action before you call the police.

But in this case it is no good calling the police because they are on the side of the burglar. So what do you do?

Muammar al-Qathafi's Libya was an embarrassment to the western side of the international community, whose people know nothing of the Jamahiriya Government. Those who criticise Libya under Colonel Gaddafi have probably never informed themselves about his tremendous humanitarian record, about his social schemes and projects which empowered Africans and which freed millions of people from the yolk of suffocating interest payments to western banks.

They have not bothered to research his energy policy, which was distributing resources among his people, directly, and insisting that Libya should not get 10% of the proceeds of its own resources while western companies creamed 90% off the top. Nobody has bothered to investigate the healthcare system, in which if a Libyan cannot get the healthcare he or she needs, then the Government pays for them to go abroad, if they cannot get the education they want they can apply for a government grant to study abroad. In western countries they do not get a grant, they end up heavily in debt.

In Libya, the Government gives people a 50,000 USD gift when they get married to buy a house. They also get 50% of the price of a car and gasoline /petrol is 14 cents a liter. Jobs are guaranteed - if Libyans do not work it is because they do not want to, and food is heavily subsidised. Farmers get given land and tools and seeds for free.

For David Cameron's UK, for instance, a country where getting a job is a drama, keeping it another, getting a home virtually impossible these days for a young family, dental care is a luxury, healthcare is in general terms heavily criticised ("Mr. X. have you any idea how much money you are costing the NHS?" Yes - that was actually said to a person three weeks before he died)...the Jamahiriya is an embarrassment. While his Government dishes out heavily biased draconian measures on youths who acquired a plasma TV screen while MPs sitting in his House of Commons did exactly the same thing, except they acquired their plasma screens by stealing from the British taxpayer, eh what?, the Libyan Jamahiriya is living proof that Britain has a lot to learn and Cameron would do well to take a page out of the good Colonel's book.

But what happens? Tired of Muammar Gaddafi's humanitarian schemes (yes, he stood in the front line against terrorism and yes he was the first to issue an arrest warrant against bin Laden and al-Qaeda) and galvanised by the hatred of all the lobbies who lost out with his African Union, NATO swings into action.

Thousands of nice crisp flags are mass produced somewhere in Asia no doubt and along with thousands of foreign mercenaries, pour into Libya from the East (Egypt) and west (Tunisia). Why else did the "rebellion" start outside the capital, where not so long ago 1.7 million people turned out to defy NATO and support the good colonel?

NATO then finds a few leaders amongst Al-Qaeda types holed up in Guantanamo and aware of a separatist element in the east of Libya, sends marauding gangs of thugs to ransack Government property, torching buildings and slitting people's throats in the streets, particularly Negroes, instigating a riot in which someone opened fire on the crowd to create a casus belli. Except the one that opened fire was not a Gaddafi supporter. It was one of the NATO/terrorists.

After that you allow thousands of these bearded thieves, serial rapists and racists to gather outside and then when all resistance has been crushed by these murdering cowards from the air, you say "Go have some fun, boys". And by God do they have fun, they make Lynndie England and the American torturers at Aby Ghraib look like fairy godmothers.

Then you get your media to lie about how it is all "over" and everything is back to normal, if only the "last remnants" of the "regime" would call it a day and stop spoiling the peace. But Ladies and gentlemen, this is far from over. The Libyan Armed Forces continue to control the majority of the country, fighting continues in Tripoli, the people detest the rebels and NATO and any "victory" is sure to be short-lived because the second NATO pulls out, the entire country will flare up in a sea of flames. So Mr. Cameron, what was that about spending cuts on public services? How much did you say you were spending per week in Libya? Oh you didn't say anything? OK then, wasn't it 32 million pounds and rising?

Whatever the outcome of this, if this was a soccer match, Colonel Gaddafi 10 NATO 0. Now Ladies and gentlemen, tomorrow's bedtime story will be the probability of NATO and its leaders sitting in a court defending themselves, facing at best a very long prison sentence or even better, if the court could be in a country like Iraq, where...