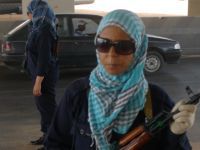 The war on Libya has not only been a war that has vindicated NATO's claim to the most powerful military force on earth, capable of imposing its will through sheer aggression wherever it sees fit, but it has also been a war that has reasserted the western mainstream media's power to not just fabricate events but to create.

The first media victory was when it got away with claiming that Gaddafi's government was attacking it's own citizens in Tripoli from the air, a claim which formed part of the pretext for NATO's intervention and also served to create panic and anger amongst the city's residents. No one was held to account when later Russian intelligence satellites and visits from independent observers to the areas alleged to have been targeted, revealed no evidence that such attacks had taken place.

One of the most powerful lies was churned out by none other than British Foreign Secretary William Hague who claimed in the first days of the crisis that Gaddafi had fled to Venezuela. The Libyan government admitted repeatedly that their media was wholly incompetent and unable to provide alternative information at the time, with the result that the people of Libya like the rest of the world believed the claims that were being made. In this instance the result was to create a sense even amongst his traditional support base that they had been abandoned and betrayed. Of course Mr Hague made no apology for such irresponsible remarks when soon after Gaddafi showed his face in the streets of Tripoli.

More recently, the BBC has yet to apologise for using blatantly fake footage from a demonstration in India claiming it was in Tripoli's Green Square, as part of their evidence that the city had fallen.

Such fabrications continued throughout the six months, as the media reported that areas had been "captured" by the rebels, when in reality, these areas had been blitzed from the air and the sea by NATO rockets with the sole aim of destroying any threat of resistance to its allies the rebels.

As the alliance bombed the rebels' path to Tripoli, on its way massacring at least 85 civilians in the Zlitan town of Majer, the leaders of hundreds of the country's tribes, including the largest, Wafalla, Tarhouna, Washafana and Zlitan, reasserted their determination to defend their areas, and to descend on Tripoli should it come under threat.

Meanwhile, the masses of men and women of Tripoli who turned out in rallies against the rebels, felt confident that should the rebels show up in their city they would be able to defeat them with the arms that Gaddafi's government had been issuing to them since the beginning of the crisis.

Now many of those people have been massacred, have fled or are in hiding. They may or may not have underestimated the ruthless might of NATO, but the media's narrative that Tripoli fell without resistance is contested by the fact that it took the massacre of thousands and at least five days to establish tentative TNC control of the capital as well as by eyewitnesses accounts of what happened during those five days and beyond.

From the beginning of the fighting in Tripoli on August 20th when I and 35 other journalists became trapped inside the Rixos hotel, it was virtually impossible to get a clear idea of what was happening on the streets outside. Throughout that period the sounds of bombs, gunfire and other heavy weaponry was almost non-stop, with shrapnel and bullets occasionally making their way inside the hotel. But like the rest of the world, the only information we had, apart from the odd moments of communication with contacts inside the city, was from the mainstream international media.

Since my release, I have begun to collate information from residents in the capital in the absence of information from sources which are recognized internationally as "independent". The following report is based on these accounts and the sources identity must be kept confidential due to the systematic targeting of anyone who betrays disloyalty to the rebels, which as I experienced myself, includes challenging their version of events in the media.

On the first day after rebels from sleeper cells inside Tripoli emerged and began attacking checkpoints manned by Libyan special forces. As is the pattern with their advance into areas on the way to the capital they faced a swift initial defeat. But with the first images emerging around the world of the rebels inside Tripoli NATO ensured it would not be short lived. The organisation sanctioned to "protect civilians", rapidly moved to bomb all checkpoints in the densely packed city. The vast majority of these were manned by volunteers - ie ordinary citizens that had been armed with Kalashnikovs since the beginning of the crisis - so that the rebels could easily move into the city by sea and by road. (see attached image of mother and 17 year old daughter, both volunteers manning checkpoint in Tripoli.)

This was followed by masses of youth and other residents in the capital pouring into the streets to defend their city as they had pledged to do during the mass rallies mentioned above and elsewhere.

The following day, NATO responded with intensified aggression. Eyewitnesses report that during this day, the broadcasting station in Tripoli was bombed, killing dozens. Shortly after the rebels claimed control of Libyan TV and the international media dutifully repeated the claim, blocking any mention of how the takeover had occurred.

Adding to the media's campaign of confusion, reports of Gaddafi's sons being caught and that Gaddafi along with other family members had fled the country continued to beam out of televisions across the world.

Having become accustomed to such psychological operations designed to weaken the people's support for the government by making them believe it had betrayed them, masses defied the reports and marched to Green Square. From inside the Rixos, during the short periods when phone access was revived, my contacts in the city who were in Green Square at the time, informed me that Muammar Gaddafi had been seen driving through the city in his army fatigues urging people to remain strong and not be deceived by the west's relentless propaganda. This has since been reported by further contact with other residents who were in the streets at the time.

Following relentless bombardment, the masses were pushed back to Gaddafi's compound Bab al-Azizia where they resisted the rebels' advance for a further 24 hours. It was during this time that Saif al-Islam, who until then the media and International Criminal Court had been insisting was captured and arrested, showed up at the Rixos hotel where we were trapped. Calm and confident, he took out a group of journalists to Bab al-Azizia where upon their return, they confirmed seeing thousands in and around the compound waving the green flag, including as the tribes had pledged, from their people across the country.

But like the peaceful march in the western mountains on July 24th which was attacked by NATO and the rebels, the masses in Bab al-Azizia were broken up by NATO bombing an entrance for the rebels and attacks by Apache gunships.

The same fate was visited upon gatherings in Green Square. Bab al-Azizia alone was reported to have been bombed 63 times during that time.

With both Green Square and Bab-Alzizia now in control of the rebels, the resistance continued in areas like Tripoli's poorest neighbourhood Abu Saleem, which a few weeks previously had held a mass demonstration against the NATO aggression and in support of the Jamahiriya. Fighting against the rebels also raged on in Salah Eldeen and El Hadba.

Armed with Kalashnikovs and Rocket Propelled Grenades, the citizens of these areas fighting 8,000 kg bombs, Apache gunships, US, European and UAE special forces and the rebels laden with NATO's sophisticated weaponry, became part of the carnage and piles of bodies were reported to line the streets.

Since then, any area known to have supported Gaddafi has reportedly been bombed or been subjected to homes and apartments being burnt and looted. And even the mainstream media has been unable to ignore the systematic targeting and lynching of anyone with black skin. It is widely known that Gaddafi's opponents deeply loathed his rhetoric and policies in support of Black Africa.

With Sirt, Sabha and Beni Walid being amongst the last areas still flying the green flag high, the rebels claim to be giving these a deadline before they resort to a "military response", implying that in the meantime, a non-military avenue will be pursued. Yet again, the media fail to highlight the hypocrisy that the rebels' ally, NATO, has been openly bombing these areas.

The same media has unquestioningly swallowed NATO's line that the targets have been exclusively "Gaddafi's forces", in the face of evidence before their very eyes to the contrary and in the absence of any independent investigation into the death toll of the 30,000 bombs estimated to have been dropped over the past six months.

The last concrete figures on the second day of fighting put the death toll in 12 hours of fighting in Tripoli alone at 1,300 with 900 injured. Far from Tripoli falling without resistance these figures suggest that Tripoli fell with the masses resisting being massacred.

As in Zlitan, Zawiya and elsewhere, the same atrocities as those committed in Tripoli, are being carried out in Beni Walid and Sirt with the complete silent complicity of journalists and "independent" observers on the ground. This is "free Libya", so long as the thousands of dead and in hiding upon which it is based goes unmentioned.