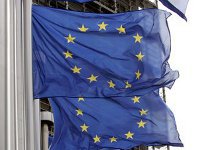 Recently, German Chancellor Angel Merkel visited Belgrade to deliver yet more arbitrary demands on Serbia before the nation will be considered for the problematic and possibly soon-to-collapse European Union. This reminded me of the brutal ultimatum that Austria delivered to Serbia just before the outbreak of WWI and after the assassination of Archduke Franz Ferdinand by Gavrilo Princip, a Bosnian Serb, and which led to the popular phrase: "Serbien muss sterbien" ("Serbs must die!").

Of course, to those of us with a modicum of historical knowledge pertaining to Germany's shameful mistreatment of the Serbs during the entire 20th Century these unrealistic, illegal, and harsh demands (such as forcing the Serbs to give up their Jerusalem, the heart of their Serbian Orthodox Christian Faith in Kosovo) were no surprise to anyone except perhaps Serbia's President, Boris Tadic who more often than not appears as a NATO-sponsored quisling/puppet overseeing the planned-well-in-advance dismantling of Tito's rump Serbia in the "reduce Serbia at all costs" and "divide and conquer" spirit that generations of German governments have obsessively and fanatically pursued in the Balkans. This uninterrupted continuity of anti-Serbian bullying and behavior calls into question the claims by post-WWII German leaders that Germany has atoned for its shameful Nazi past.

No people infuriated Hitler more than the Serbs when Serbian officers led a putsch and tore up the Tripartite Pact in 1941 inflicting "Operation Punishment" on Yugoslavia as a result. The racist and savage Nazi and Nazi quisling brutality initiated a massive yet largely unacknowledged genocide of some one million Serbian Orthodox Christians, ethnic cleansing of another million of them from lands they had inhabited for centuries within Yugoslavia, and the forced conversion to Roman Catholicism of over 200,000 of them in the Nazi quisling "Independent State of Croatia" which encompassed Croatia, Bosnia, and a large chunk of Serbia all the way to Belgrade. For every Nazi soldier killed by the Serbs (either as Partisans or Chetniks), 100 Serbian civilians would be slaughtered and for every Nazi soldier wounded, 50 civilians would be murdered. An entire class of high school children in Kragujevac, Serbia was systematically used for target practice and murdered in cold blood as a result.

The post-WWII West, eager to please and court half-Croat/half-Slovene Josip Broz Tito (the post WWII communist dictator of Yugoslavia), the war criminals who committed genocide against the Serbs (Germans, Croatian Ustashe, Albanians, Bosnian Muslim Handzars, Hungarians) were largely never brought to justice including Kurt Waldheim, former UN Secretary General and President of Austria, reterrorizing the Serbs some 60 years later and creating a stain in the Balkans that just won't go away regardless of the mainstream corporate-controlled media's Goebbelesque efforts to whitewash and deny Balkan history. The fact that the Serbs dared to resist Hitler, delayed Operation Barbarossa by at least three weeks and tied up dozens of Nazi divisions in the Balkans that were needed on the Eastern front, and even succeeded in temporarily defeating the Nazis, forming the first liberated republic in Nazi-occupied Europe in Uzice, Serbia for over two months, demonstrating to the world that the Nazis were not as invincible as claimed (and thus giving hope to the Russians who ultimately proved this) have not been forgotten by post-WWII German leaders and form a nucleus of their hatred against all Serbs.

Thus, German leaders have largely not confronted the shameful Nazi past of their predecessors as they are repeating the exact same 19th Century program to chop up and destroy Serbia and leave the suddenly alienated Serbs to the mercy of their WWII Nazi-puppet enemies and live in ethnically and religiously "pure" fascist banana republics (such as Croatia and Kosovo) that treat them as fifth-class citizens. The problem is thus that history is repeating itself in Europe and the Russians, who suffered more casualties than any other people in history during WWII should be extremely concerned at this resurgence of anti-Serbian and anti-Orthodox Christian fascist and racist attitudes and actions coming from "civilized" German leaders and their quisling puppets in the Balkans.

As one who admires many aspects of German culture and who always harbors hope of Slavic-Germanic reconciliation, I am deeply saddened at the horrible anti-Serbian actions perpetrated by Germany in the recent Yugoslav civil wars which include illegally recognizing Croatia and Slovenia before issues of civilized treatment of minorities could be guaranteed, illegally invading and bombing the Serbs under the guise of NATO (just as in 1941), illegally recognizing and promoting the Islamic terrorist drug- organ- and sex slave- trafficking "safe haven" of Kosovo, and invading this Serbian territory (supposedly as "peacekeepers" but really to aid the Kosovo Liberation Army in terrorizing the local Serbian population there) effectively stealing the territory from the Serbs, and maintaining their fanatical anti-Serbian rhetoric. Germany had an opportunity to square with Her horrible past after the fall of the Berlin Wall and subsequent reunification courtesy of Russia.

Tragically for the world, German leaders have demonstrated that they weren't yet ready for the world stage with their immature, underhanded/surreptitious behavior against the Serbs and have yet to come to terms with their shameful past. I only hope that Russian leaders take notice of the fate that has befallen the Serbs and act to remind the Allied nations such as the US of the dangers of German fascism if left unchecked and the ridiculousness of squandering US taxpayer dollars supporting German national interests at the expense of one of the best allies that the United States ever had (and probably ever will have) in both World Wars: Serbia. After what Germany did to the Serbs in WWII, she never should have been allowed to interfere in the Balkans. The Serbs also need to be aware that they will never be accepted by Germany and thus the European Union except as defeated and converted untermensch slaves and should seek alliances based on historical and proven reality and not media-brainwashed fantasy. The European Union needs the ever independently-minded Serbs far more than the Serbs need the EU.

The mistreatment of the Serbs by Germany should never be forgotten by all those who seek true justice in this tainted world and should serve as a reminder to us all that freedom requires eternal vigilance. We also need to be aware that those who forget or ignore history will be doomed to repeat it.