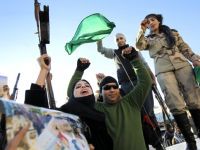 Mohanned Magam was 23 years old, a young Libyan anti-war activist proudly supporting his beloved Jamahiriya against the marauding gangs of terrorists and thugs unleashed by NATO against his Government, against his people, against Libya and ultimately, against Africa. His crime? None. But then again NATO's terrorists do not need a pretext to murder.

This is one of the last messages sent by Mohanned to Mathaba, an independent news agency:

My name is Mohanned Magam, i'm from Libya. I was given your contact by a friend who says you are a friend of the Libyan people. We are making this appeal because we are suffering great hardships because of the daily bombing of our cities and the blockade of Libya by NATO forces. Too many civilians have already been killed, men women and children by NATO which is making our life harder with each passing day. So we are making this appeal to you to help us organise an event to raise public awareness about our suffering with a march around the world's capitals against the aggression on Libya and to defend our unique Direct People Democracy in Libya. Please help us because we are dying day by day here. We ask Mathaba if it is possible to be involved in organizing this march and to let as many people as possible to know about this event. We would really appreciate your kind help and God willing we can help to stop this war in Libya.

Mohanned died this weekend for the truth. This truth NATO and its terrorists have tried to suppress from the beginning. And for Mohanned's sake, let us tell the truth again loud and clear for all to hear.

The entire Libya campaign was based upon a false flag event when the NATO-backed Benghazi terrorists torched buildings, slaughtered people in the streets, ran amok and then staged a "massacre" by firing into a crowd (including Gaddafi supporters) and then blaming the "massacre" on Colonel Gaddafi. NATO's military and media wings swung into action with a massive Saddam WMD-style campaign of lies, as the UK entered its sixth war under five Prime Ministers, Sarkozy looked for a slice of Libya's oil and who else, the USA was ready behind the scenes, using NATO "to save the US taxpayer money and to save the lives of American boys".

Militarily, the "rebels" or "terrorists" or whatever they call themselves, are a joke because without NATO's air power, they were winning absolutely nothing. Indeed, they were more famous for how fast they could flee than how well they could fight. Let them take no credit from this at all.

As for NATO, it entered this conflict under the rules of engagement and under the international law covering the case, namely the UN Charter, the UNSC Resolutions 1970 and 1973 (2011) and the Geneva Conventions on war crimes. The fact that due to the heroic resistance of the Libyan Armed Forces and the People of Libya, like Mohanned, who stood up to the barbarous assault by NATO from the air and the obscene atrocities of its terrorists on land for six long months and were so successful that NATO had to resort to breaking all the laws mentioned above (court cases pending), says it all.

Message from a group of special persons who loved Mohanned

My dear brother Mohanned Magam the martyr has passed away today in Abou Salleem's bombing - Mohanned worked for Libya as a volunteer day and night to get Libya's safety back, he worked with journalists and helped in preparation for the million man match in Tripoli, he was so happy that day. May Allah rest him in peace. We love you my brother, we are proud of you our hero.

(Message passed to me by his dear friend Ksenija)

Today, a group of young people of all nationalities from a great number of countries, people who tried to help Mohanned, are crying tears of sadness for his passing on and they are shedding tears of desperation because NATO and its terrorists have just taught us, clear for all to see, that the people of the world are facing an Axis of sheer, pure and unadulterated evil.

Mohanned is not today with us, he is in a far better place. For the good people of the world, it becomes obvious that we must take a stand in the name of good over evil, fighting for God against Satan, for the Satanic forces have already been unleashed on the streets of Libya by their Lord, NATO.