Senator McCain and the bleating of senile old goats 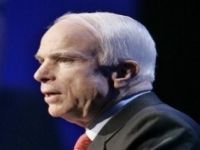 It is the silly season, those summer months when politicians are away on holiday playing golf and when the news is full of stories about water scorpions in ponds, NATO terrorist strikes in Libya and oh! just occasionally the bleating of a senile old goat with little to do, with zero credibility and as much gravitas as a syphilitic squashed slug.

What was that? Ah right, Senator John McCain has just opened his snout again. What did he say? Was it to speak about his ra ra ra war experiences as a prisoner of war and how he didn't cavort with his captors? Wicked, Stockholm Syndrome, eh what? No this time it was to say Russia is next in line for an uprising because it, er, "needs democracy".

Well now, what kind of democracy could that be? Could it be the freedom and democracy which comes with slaughtering people's children in their homes, starting rebellions by arming terrorists, sending armed militants who have fought your own forces to fight for you, strafing water supplies to "break their backs, the savages!" and civilising people with the Bible and the bullet? "We kill your kids, we set you free, the younger the kid, the cooler it is...freedom and democracy". Is that it?

Or would it be the freedom and democracy which comes with using NATO as a tool to pander to the whims of corporate elitists miffed because Muammar al-Qathafi has formed the African Union, freeing countries from the yolk of colonialist policies which siphon off 90% of their resources and saddle them with crippling levels of debt? Let's be honest this is what it is really all about isn't it? I mean the UNO was going to give the man a prize for his humanitarian record this year.

No, perhaps he is referring to the freedom and democracy that comes with using and abusing international law, using the UNSC as a chamber for trading interests, breaching each and every fibre of diplomatic norms, the UN Charter, the UN Resolutions, the Geneva Conventions and fundamental legal precepts on the non-violation of borders of sovereign states?

Or even the freedom and democracy that threatens independent journalists, spies on Facebook accounts, closes them down, tampers with emails and sends death threats?

So with freedom and democracy like that, Russia is better with its democratically elected president, who, together with the Prime Minister garners far more support than Senator McCain ever did or ever will. So who the Hell is Senator John McCain to open his snout and bleat his crass stupidity, pig-headed arrogance and priggish ignorance?

We can read something into this insinuation. Indeed, who was behind these uprisings? Why was Libya's started only after its frontiers had been secured to the east and west? Why were foreign mercenaries used by NATO? Why has NATO instigated an armed rebellion in a peaceful country, being responsible for thousands of deaths? It was not the Libyan authorities killing civilians, it was NATO's terrorists. So who was behind this? And how come Senator McCain knows so much about these uprisings he can even predict where they will start next?

Yes Senator McCain, we all know where this is leading and we all know who is at the end of the line. The thing is, the world is split into two: the international community, whose axis has its center in Washington and spans western Europe and narco-terrorist states like Colombia and the world community which is based upon international law and brotherly relations.  However, Senator McCain, the hearts and minds of the world community are not with your international community. While you and your ilk spout hatred and evil, the people of the world speak of love and doing good for one another. You might want to steal resources, but those resources are not yours, they are ours.

And Senator McCain, you do know in the Moslem world what happens to the thief do you not? His hand is cut off. Well, your lot got a taste of the medicine when they tried it on in Georgia in 2008; your darlings ran screaming with their tails between their legs and your military advisors, caught on camera, made a perfect backdrop for a video I made entitled Run, rabbit, run!

So, Russia is next, is it? A word of advice, Senator McCain: Those who have glass roofs should not cast stones.