Many knew in advance this NATOwood production via Qatar and the no credibility Al Jazeera was in the works. It happened sooner than we anticipated. I think their whole effort was pushed ahead too quickly by someone somewhere, But then the divine one has His way of protecting His own. 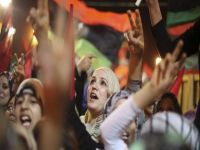 Let's pretend we are in Tripoli for the camera

Clearly, they were not anticipating the poor results.

Once again, stupid NATO overestimated themselves and underestimated the Libyan people, Libya and Libya's leadership. How many fatal mistakes can one terrorist entity make? The filth did, however, manage to kill close to 1,300 innocent civilians in only 12 hours. So much for protecting civilians.

Their futile annoucements of terrorist victories and the end of the Gaddafi government demonstrated not only their utter arrogance and pretentiousness, but also their utter stupidity and incompetence.

It is my belief that all the firepower in the world won't do a bit of good in the hands of dimwitted pieces of garbage...such as NATO and their terrorists. You only have to look at their impressive results in Iraq and Afghanistan, as well as Libya.

How disgustingly they were salivating...that's the only genuine thing about them and their epic film production, their inability to hide their true motivations. No, the government of the Libyan people did not collapse at your whim, your stinking Pax Americana...your Rule Britannia, Britannia rule the waves...Je suis Napoleon Bonaparte allons chiens de la partie.

It reminds me of that saying about the irresistible force meets the immovable object...however, that force is hardly irresistible. But the people of Libya are immovable. They will not give up their freedom and well being, their way of life or their leader. Their country is not for sale, even though a few disgusting pieces of trash were willing to sell out to the bankrupt west, talk about idiotic fools.

I had to laugh about the stupidity of the corporate media with their various titles and stupid disinformation, such as "Gaddafi on the run." How idiotic. The cowards are projecting their own cowardice on to the Libyan leadership.

Much like the oft resurrected Khamis Gaddafi. What is it now, the propaganda has had him dead no less than 3 times? Then there was the son reportedly "captured" and ready to be hauled off to the International Criminal Court. All of it was nothing but bald faced lies and malicious propaganda.

What does it say about them that they have to resort to such lies? They are knowingly doing wrong, that what it means.

NATO countries proved beyond all reasonable doubt that they are led by a gaggle of dimwitted simpletons with this latest effort. How gullible and stupid do they think people are? So they were desperate to demoralize their opposition, too stupid to realize it is an utter impossibility to move the immovable object(s).

Their futile efforts even included direct threats against those willing to tell the truth.

Nothing worse than when NATO projects their own evil traits onto others. They felt that those loyal to Gaddafi could be frightened off, lured to their side, sell out. How disgusting.

One would love to see their behavior under similar circumstances, if they had to face a foe with similar firepower. The notion that NATO would dare to fight an equal foe would be the same as comparing the possibility of a pith-headed, demented simpleton discussing quantum physics with a Jubilee Professor.

It would not happen. Instead, the NATO countries would be caught sitting silently, white-faced, in the midst of some fetid stench. Their subordinates would have to be ordering a gross of fresh diapers for them.

How many people have you given houses to?

How many people have you paid for their total education, even including at foreign universities?

How many people have you shared the revenues with in your country for the sale of your country's resources?

How many of your people get total paid for complete medical care at home or anywhere in the world?

How many people have you raised from abject poverty to the highest level on your continent?

We know the answer to that. How dare you challenge the people power democratic government of Libya. How dare you demand the leader the people want to leave. Unlike you, he is a man of honor, a man of his word, a man of action and good deeds, a man that has worked hard to improve lives not only in his country, but worldwide.

You have supported these stinking worthless terrorists and the evidence mounts daily of their disgusting criminal behavior, the looting, the murder, the mutilation, the destruction. Some of these same people (a small amount are Libyans) have even benefited from that free education available to Libyans.

Imperialism, terrorism, totalitarianism, barbarism, nazism, fascism, intolerance, hate, greed, sociopathy, racism, anti-freedom, anti-democracy, these are all words that represent what NATO countries are all about. Their declarations to the contrary are ludicrous at best.

Something about bombs and genocide that makes people impervious to deception. Therefore, it is doubtful that NATO can come up with any further deceptions in the anticipation of success.

Time for dialogue. Time to stop the murder and destruction. Time for a ceasefire. Time for war crimes trials.

Again I repeat, NATO RIH, NATO rot in hell. Probably even the devil himself won't be able to stand you.