NATO's lies we have seen before. We saw them in Kosovo as they protected Albanian mafia terrorists and controlled the drug trade, we saw them in Iraq with Saddam's non-existent Weapons of Mass Destruction, we saw it again with the invention of a casus belli against Libya which does not exist. But where do the media come into this? 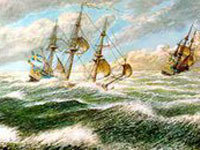 As a permanent member of staff of Pravda.Ru, writing for the English version, I usually cover several sections which need material, be these World Events, Economics, Cultural Events, Society or even Sport; as Director and Chief Editor of the Portuguese version, I receive materials from our hundred or so correspondents spread out over the eight Portuguese-speaking countries and place the material they send me, occasionally writing an Opinion/Editorial piece in both versions.

Due to the sheer injustice of NATO's Libya campaign, due to the barefaced lies upon which it is based, I feel obliged to write more of these Op-Ed pieces to counter the nonsense that NATO countries are spreading as a cover for their criminal acts of murder, attempted murder, wanton destruction of public and private property, occasioning criminal damage, strafing water supplies and electricity grids with military hardware. It doesn't get much more evil than the purposeful precision-bombing of a house where three babies were murdered by a NATO pilot because they thought Colonel Gaddafi was there. He was. He was outside feeding the animals.

However, I never expected to see myself forced to get back into front-line reporting, finding myself obliged to re-enter the realm of what I term hoof-on-the-street journalism, fact-finding missions as opposed to the comfort of op-ed pieces based upon 35 years of experience. Yet due to the total lies, and, I am sorry, bullshit, in the western media, I find myself obliged to tell the truth, first because as a journalist that is supposed to be what we do; secondly because the name of the newspaper I write for, PRAVDA.Ru, means "truth" in Russian and thirdly, because not to do so is an insult to the brave young women and men, independent journalists, who are out there risking their lives getting us information. And what does the western "bought" media do? It twists the stories until they are unrecognisable and blows a raspberry in their faces.

I have written many lines about this war and by now everyone reading this column is aware that Colonel Gaddafi was to receive a humanitarian award from the UNO for his excellent humanitarian record in March 2011, that this "rebellion" was fuelled from outside (it started on the frontiers), that this "rebellion" is mainly fuelled by Islamist fanatics inside Libya or foreign terrorists, that many of those fighting the Libyan Armed Forces fought for Al-Qaeda, that Al-Qaeda runs through the ranks of the "rebels", that NATO has committed countless war crimes, and that NATO is illegally and openly interfering in an internal conflict aiding the terrorists and bombing the Libyan Armed Forces.

So now, due to the lies spread across the western media, I felt obliged to do the work of thousands of "bought" media outlets and sift daily through battle reports from my contacts on the ground. Some of these are the independent journalists I mentioned, others are reliable sources inside Libya, and present the real picture.

Let us start in the East. Al-Brega has not fallen at all. It is totally under the control of the Libyan Armed Forces (LAF). In fact, the LAF are currently conducting operations inside Benghazi itself, where the terrorist elements are in total disarray after fighting amongst themselves, stealing the money NATO has been giving them (what was that Mr. Cameron said about public spending cuts? He is spending tens of millions a week strafing kids in Libya and donating money to Al-Qaeda terrorists. For those who do not believe me, Google up one of their chiefs, Al-Hasidi). On Sunday another NATO helicopter was shot down.

In the centre, the city of Misuratah is around 95% under the control of the LAF, the terrorist forces there are surrounded and the port is under Libyan Government control. Any NATO vessel entering it will enter under the consent of the Libyan Government or else will be blasted into the water and we will see whether the Mediterranean fish really do like frogs or their Anglo-Saxon masters who say horrible things about them behind their backs. It is said that the CIA agent Khalifa Haftar has been captured in this operation. What was he doing there? Other rebels are trapped in Tawergha.

In the West, here NATO and its puppet press really had a heyday yesterday. The fact of the matter, after close consultation with sources on the ground, is that Al-Zawiyah, Gharian and Surman are firmly under the control of the Libyan authorities. This has been confirmed by independent journalists in the area, has been reconfirmed by sources in the Libyan authorities and has been reconfirmed by reports from tribal leaders in the area. The largest tribes, the Warfa'llah, Tarhouna, Zlitan and Washafana, are all firmly behind Colonel Gaddafi. Terrorist activity in the area is restricted to pockets of elements which are being liquidated as the areas they infest are sterlised.

The town of Sibrat, full of priceless Roman antiquities, was bombed by NATO. This is a crime against Humanity.

The terrorists have made a list of store owners, shops which sell beauty products for women, in Benghazi who they wish to decapitate. These are the pigs who NATO is protecting.

Qatar has been supplying the terrorists with weaponry; the French have boots on the ground, outside the auspices of UNSC Resolutions 1970 and 1973 (2011).

Because August 17 is the seventeenth day of Ramadan, the date of the Battle of Badr, in which the prophet Mohammed secured victory. One can understand the terrorists wishing to shape public opinion in their favour because they are increasingly desperate and impotent. But western news outlets doing their dirty work for them and lying to protect NATO's war crimes?

These also amount to economic crimes - NATO has sent the Libyan oil industry back at least three years according to a spokesperson from Wood Mackenzie. Production had been 1.6 million b/d before the terrorist insurgency.

The pig-headed arrogance of the leaders of the European NATO countries involved may eventually be countered by an attack of intelligence on the other side of the Atlantic, where it is evident the White House is trying to distance itself from yet another foreign policy disaster and where the State Department no doubt sees its plan to destroy the African Union and re-colonise Africa with AFRICOM go up in smoke. Obama 1 Hillary Clinton 0.

Time to pull out, time to recognise the no-fly zone was successfully implemented, time to recognise that Muammar al-Qathahi was not killing civilians but rather, defending them from terrorists, and time to admit that the LAF are doing what they can not only to avoid all civilian casualties but also,  even those among the rats. Can NATO claim the same?

Tripoli celebrates the victory in Misratah, wholly unreported by the western media: