Libya: The massacre, the cover-up. What is going on? 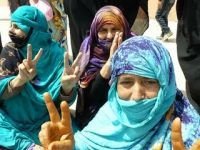 The mainstream western media are curiously silent about Libya. Why could this be? We reveal some shocking facts, telling you where NATO's money is being spent. While community programmes and being cut back in Europe, did our readers know that up to 100.000 USD per aircraft per hour is being wasted massacring children in Libya?

I will tell you why the western "bought" media is quiet about Libya. It is quiet about Libya because NATO is committing more and more massacres of civilians and NATO's darlings, the (mainly foreign) terrorists, are losing to Colonel Gaddafi's forces on the ground. Towards 21.00 GMT on August 9, NATO aircraft committed a massacre of civilians in the village of Majer, near Zliten - 85 people lost their lives, including 33 children, 32 women and 20 men.

The international community looks on, the international media remains sullenly silent. And the truth about what is happening in Libya is shocking NATO to the core. That is precisely why in recent weeks, since the brilliant Libyan victory in the Battle of Al-Brega against NATO's terrorists (it is claimed around 100,000 foreign bearded Islamist fanatics crossed over the frontier from Egypt just before mayhem broke out), a battle in which a smokescreen clouded the skies so that NATO's jets could not (illegally) intervene in an internal conflict to protect the terrorists against Libyan government troops, NATO has been pouring more and more mercenaries into their fight.

It is also why NATO has been strafing civilian structures like the Libyan water supply system, targeting the electricity grid, to "break civilians" and destroying the factory making water pipes, because it is staring defeat in the face despite Cameron and Sarkozy and their sickening clique of cowards having spent hundreds of millions of their taxpayers' dollars on this illegal campaign or murder, wanton destruction and criminal damage.

Cameron even has the audacity to speak out against "criminals" in his own country, when his own forces are committing massacres of civilians, destroying public and private property and slaughtering kids in Libya.

And why exactly is NATO becoming so hysterical? While at home people start to question why their community centres have been closed, why that hospital wing will not be opened, why spending cuts of up to 85% in education and training programmes have left tens of thousands of youths without a future, while NATO spends millions upon millions daily, things are going disastrously wrong on the ground.

Increasingly, more and more foreign mercenaries are captured and increasingly, it becomes obvious that a very large number of the terrorists unleashed by NATO are not even Libyans. And so desperate it is becoming, apparently, that the USA is secretly holding talks with the Libyan Foreign Affairs Ministry (according to an off-the-record statement from a Ministry spokesperson in a very senior position), whereby Tripoli is being told that if it renegotiates contracts worth 45 billion USD it currently holds with the Russian Federation and PR China, then Washington will act accordingly.

Wonderful solidarity from the country whose White House stated in a letter that it is good to involve NATO because it saves the American taxpayer money and saves the lives of US boys. Yes, they actually said that. Mind you, if the French pilots knew what their British colleagues said about them, hahahahaha.

The British authorities are also, apparently, frantically trying to save the enormous contracts they signed in the construction sector, now they see defeat staring them and their terrorist friends square in the face.

According to a documentary by the Serbian analyst Milovan Drecun (1), NATO's bombing campaign has directly and negatively affected the livelihoods of some 3.5 million people in Africa because the construction projects in which 3.5 million foreign workers made their livings, have stopped.

In fact, the latest documentary, Forbidden Truth, by Milovan Drecun, military expert and political analyst, a war correspondent for 30 years, makes spellbinding viewing. He visited the front line in Libya and spoke directly to people who had fled the clutches of NATO's terrorist forces.

It transpires that the massacres and killing were never by Gaddafi's forces, but rather from terrorist elements with links to Al-Qaeda, liberals, counter-revolutionaries, thugs, common criminals, Islamist fanatics and opportunists, whose space is labelled "The Opposition" while the west continues to label the terrorists as "rebels". And NATO's part in this has been massive. Until June 7, NATO flew 11,000 sorties, in which it murdered or injured 4,711 people - at least 856 of these were innocent civilians, 109 were children. At least 523 civilians were seriously injured and 3,332 received minor injuries.

So where is this legal and under which international law? Why does the international community sit back and watch, doing nothing? Why is Africa not considering a renegotiation of all contracts now, excluding the NATO countries taking part in this outrage?

Milovan Drecun also discovered that Muammar al-Qathafi has the support of all the tribes in Libya, the Libyan youth is by and large with him and he controls some 85% of the territory despite the collective best efforts of wanton destruction and murder by NATO countries. Recently, the 2,000 sheikhs and representatives of the tribes held a meeting in which they decided there was to be no partition of Libya, that the west has no right to interfere in the internal affairs of Libya and that Libyans do not have the right to kill each other.

Bottom line: NATO has squandered MILLIONS of dollars which its member states could have used in development projects at home, it has committed massacres, NATO and its terrorist friends are the ones killing civilians, Gaddafi's people are behind him and the terrorists are losing on all fronts.

Now if that isn't a criminal, murderous failure of a policy by NATO, it is difficult to imagine what is.