by Leonor Massanet and Flavio Signore 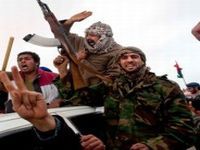 Flavio Signore is a film maker, and he and Leonor traveled recently to Libya as they often do, to record events on the ground so that the truth may be known about the aggression against Libya.

The armed rebels, backed by NATO use very dangerous groups as an advanced patrol to scare the population into surrender. The Libyan people describe them as foreigners, without any goals. The first thing they do is rob the banks, setting fire to public places and they have a blacklist of people who are murdered as an "example," that is to say live slayings. Then they carve the corpses up and hang them on the square.

When these groups advanced across the border from Tunisia, they entered the city Wazin, west of Nalut. The locals had already heard about the atrocities committed, and in three hours most of the families left their homes and fled with nothing across the Sahara not to be located.

From Wazin they went to Drhiba, a city on the border with Tunisia. It is only 5 Km away but they were driving 35 km / hour to go through Saharan dust. All families met in Drhiba and from there searched for cars and buses to go to Tripoli where they knew they would be protected.

The Wazin exit was April 21 and they arrived in Drhiba on April 22. Their route was: From Drhiba to Armada to Ben Guerdane (Tunisia) and Ras Ajdir which is on the northern border of Tunisia / Libya. There were almost 100 families altogether. Upon reaching the border, we were received by Libyan government officials, we were welcomed and they helped us to enter.

They divided us between the resort town of Suarah and initially they took us to a hotel and then we were brought here to Tilil in Sabrata. As soon as we arrived, the government gave us everything necessary to live, food, gasoline and everything we needed.

We visited the towns to interview refugees and we found a heavenly Mediterranean virgin beachfront place. Families there seem happy and relaxed despite sorrow and the difficult, bad situation they have lived through so recently. The children run about on the lawn and come to greet us.

The very hospitable families invited us to an afternoon snack and tea and were very open with us. They explained what happened to them, and also that it happens to many more families in Libya because once these groups of foreigner's patrols arrive, they are forced to flee, as well as when NATO bombs houses or places nearby.

The Libyan government does not allow anyone to be homeless for even one day, as we have seen. All tourist villages and hotels in Tripoli and the West are full of refugees. Some fled from Ijdabiya, Azzentan and many other places.

We told Aljazeera TV that they were bombing but they did nothing. The rebels have phoned them and told them that if they were on their side they would give them money.

They said that Qatar would help us, but they are a nation with long beards. They burned our homes and some of the other attackers were Tunisians and Egyptians. They say they are people "without a program," just burning and stealing. They say to us that they are not there for a revolution, but are only there to burn, break and kill.

Translated from the Spanish verion by: