It started with Georgia, it ended with Libya. NATO has lost the capacity to whitewash its evil schemes by manipulating the truth. Despite desperate attempts to control the Internet, the flow of information is free enough for the truth to come out and for the millions of activists around the world to use this freedom to divulge what is happening. 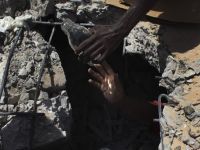 I am proud to say that I saw through this NATO campaign in Libya before it started - the western and eastern borders were secured through the "revolutions" in Tunisia and Egypt, the flags had already been mass produced and shipped to Libya's eastern frontier (those flags from the time when Libya was the poorest country in the world, before Colonel Gaddafi made it the richest in Africa), the "rebels" had been armed in Benghazi and shipped in from other theatres of war where they were attacking NATO (Iraq, Afghanistan) and allegedly, some of them released from Guantanamo to become allies of the United States of America.

The target was obviously Colonel Muammar al-Qathafi himself, whose tremendous social programs in Africa had cheesed off the banking lobby, the energy lobby and the arms lobby, whose criticism of the excesses in Islam had inflamed the hard-line Islamists (their power base being in Benghazi in particular and Cyrenaica in general), whose distribution of the oil wealth directly into the bank accounts of the Libyan people frustrated those echelons in Libyan society as he by-passed their corruption schemes, whose pan-Africanism struck a dissonant chord with the racism endemic in certain parts of Libyan society.

Therefore it came as no surprise at all when we were suddenly hit by a media barrage of "unarmed civilians" being "attacked" by the "bloodthirsty tyrant and dictator" "Gaddafy" who was "mad" and whose "regime" was "hated" and would be overthrown "within weeks" by the "people" as he witnessed "mass defections" from his "compound". Yes, all the key words are there. Then all we needed was an image of a screaming child and right on cue there it was on day two - dug up from the archives, some such video shot of a thirteen-month-old boy screaming in terror as he was vaccinated for MMR without a mark on his body looking at the syringe just off camera.

The camera doesn't lie? These days it can and does. And so can the media.

How millions of people were duped by this orchestration of lies defies logic, how politicians such as the CHOCS (Clinton, Hague, Obama, Cameron and Sarkozy) could look the camera in the eye and lie through their teeth is an indication of how false and evil they really are, or else a signal that they themselves are controlled by that invisible clique of lobbyists representing the weapons, banking and energy sectors which control their economies, in which case our western democracies are, in a word, a sham.

Saying from the outset that I would not sit back and let NATO deride Muammar al-Qathafi with gratuitous derogatory labels and aware of his tremendous legacy in Africa - his telemedicine programmes benefit the entire continent, his e-learning programme reaches all corners of Africa - and aware of his excellent humanitarian record for which he was to receive a UNO award in March 2011, I set about writing the truth and in doing so encountered a tsunami of popular indignation against NATO and in favour of Muammar al-Qathafi.

Happily, I saw that I was not alone. The millions of individuals and groups around the world spreading the truth about Libya are fighting the victorious media campaign outside Libya; the millions of Libyans inside the country taking to the streets against NATO and in favour of their Brother Leader and the Jamahiriya bear witness to the fact that from the outset, NATO was telling lies.

Therefore today it comes as no surprise that there exists a wealth of information plastered across the Internet about the real origins of this movement (a false flag event in which terrorists fired on the population and blamed Colonel Gaddafi), about the real identity of the "unarmed civilians" (heavily armed terrorists led by a convicted terrorist, Hasidi), about the human rights abuses coming from the rebel side (and not Colonel Gaddafi's forces), about the tremendous amount of time Muammar al-Qathafi spends before a campaign calling on his opponents (many of whom are mercenaries brought in from abroad, even NATO countries) to lay down their arms and making sure civilian casualties are kept to a minimum (and not the nonsense NATO speaks about).

It comes as no surprise that even the corporate (bought) media are now starting to carry stories of NATO's massacres (another one yesterday precision-bombed a hospital murdering seven civilians), and about NATO's flouting of international law (1).

So now we see: a senior NATO official apparently calling for NATO to target civilian structures to break the population (as they did in Serbia, targeting electricity and water supplies), NATO bombing the main water pipeline which carries water to 70% of the population, then the following day the factory making the pipes to repair it, NATO precision bombing family homes and murdering children. If that isn't evil, I don't know what is.

NATO has lost the media war. For every bullshit story they spin, another thousand websites open up with the truth - documented and with photographs and films as evidence.

In short, Google up or call up on you tube Libya+rebels and see what you see. Are these unarmed civilians? Then why is NATO siding with terrorists? Why did NATO not heed Colonel Gaddafi's call for a free and fair internationally monitored election? Because they knew he would win. So NATO does not stand for democracy.

This campaign is about destroying the African Union which Muammar al-Qathafi sponsored, re-colonising Africa after he freed large swathes of business and trade from western domination, substituting the African Union with AFRICOM, stealing Libya's oil, destroying the Jamahiriya (government through real democracy, people's congresses) and taking the money from Libya's sovereign fund and gold reserves.

It is about funding and arming terrorists to achieve the aim, it is about violating the UN Resolutions and international law covering the event through illegally supplying the terrorists with weapons and through boots on the ground.

The international community is at a crucial turning point in world history, which will never be the same again. Either the governments of the world do something and stop examining their navels pretending nothing is happening or else the people of the world will do something about it themselves. Future generations will look upon this as the time NATO was stopped in its tracks, the time the evil war-mongering greedy self-interests of the faceless cliques ceased to be policy...or as the time when collectively, humanity swallowed the toad in silence in a sickening sea of collective snivelling and yellow-bellied cowardice.

I sincerely hope it is the former.

(1) Indictment of NATO for war crimes