Has the international community gone mad? 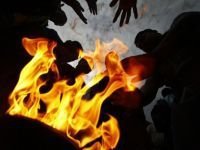 For those of us who thought we would enter a new era on the threshold of the Third Millennium, for those of us who dreamed about an international community of friends based upon fraternal relations, devoid of hatred, killing, massacres...how wrong, naïve and gullible we were. We also make a shocking revelation which will strike to the heart of NATO.

International law does not permit me to arm myself with an automatic weapon and an RPG launcher and go and take revenge for NATO's cowardly and murderous assault against Libya and Africa because such would be branded as terrorism. Neither does international law permit NATO to go far beyond the scope of UNSC Resolutions 1970 and 1973 (2011) in taking sides in a conflict that is now described as a civil war, a civil war started by forces outside Libya using the endemically separatist and Islamist elements in the East of the country. The difference is, if I were to do one hundredth of what NATO has done in Libya, I would be arrested, while NATO can strafe civilian buildings, hospitals, schools, private homes, committing massacres, murdering children, purposefully targeting Colonel Gaddafi and his family, take sides in an internal conflict, commit acts of murder, attempted murder, criminal damage with intent...and the result is impunity? No ....ing way!

And apart from NATO siding with these armed terrorists (check out "Libya rebels + images"  on a search engine and ask yourselves whether these are unarmed civilians being attacked; check out You Tube "Libya rebels + atrocities" and ask why NATO is bombing the Libyan Armed Forces to protect this filth), certain members of the international community, including, now, the United States of America, have declared the "rebels" as the legitimate government of Libya. Has the international community gone mad? Since when were they elected? How democratic are they when compared with the Jamahiriya? For the critics of Gaddafi, one question: Do you even know what the Jamahiriya is? Shouldn't you inform yourselves before taking sides?

White House: NATO means less costs for the US taxpayer and less loss of US lives

To understand why, it is perfectly simple: this time, after Serbia, after Iraq, the international community was far more ready to respond to NATO's act of aggression because by now everyone sees through the hype: NATO is not a defensive organization which serves to protect its member states against attack, it is a bellicose organization which panders to the whims of Washington (the White House recently stated that NATO is useful because it means actions cost less to the US taxpayer and cost less American lives - yes they actually said that in an email) and which implements the policies controlled by the above-mentioned lobbies.

And in Libya, NATO made yet another cynical attempt to whitewash its actions using the corporate media to shape public opinion. For those who think Colonel Gaddafy is a dictator, read his Green Book (1) and read the UN Report for which he was to receive a humanitarian prize this year (2). For those who think the Libyan rebels are innocent civilians and not armed terrorists, there are thousands of images and videos on the Internet which so obviously prove the opposite.

Has anyone reporting on Libya actually bothered to contact sources on the ground and to tell the truth? Well here it is. The "rebels" have time and time again stage-managed false flag events, committing massacres and blaming them on the Libyan Armed Forces; they have massacred people in the streets, they are racists (targeting black Libyans) and they wish to impose Sharia law. Their military commander, Abdel Hakim al-Hasidi, himself admitted to having connections with Al-Qaeda and admitted that many of the terrorists fighting the Libyan Government also fought against NATO in Iraq and Afghanistan. Their civilian leader, Mahmoud Jibril, twice passed the death penalty against Bulgarian nurses working in Libya when he was Justice Minister and Muammar al-Qathafi lifted it.

This will shock the world: Spread this news far and wide

Despite NATO targeting Libyan Armed Forces positions (is this protecting civilians?), the Libyan Armed Forces are not crumbling, contrary to what the corporate media has insinuated. In fact, they are making good progress. And here is the truth, straight from the shoulder right between NATO's eyes, square in the face of Obama and Cameron and Sarkozy (who by the way are spending MILLIONS of their taxpayers' money every day on supporting Islamist terrorists on Europe's doorstep...Nice one Washington, yes I noticed it. Cool way to destabilise a whole continent and undermine its EURO).

My contacts on the front line in Libya have revealed to me the modus operandi of the Libyan Armed Forces. Unlike NATO, which bombs and strafes and massacres at will with a callous disregard for human life, and in its desperation increases the ferocity of its attacks from 30,000 feet, the Libyan Armed Forces do NOT fire indiscriminately. Progress is slow because they call upon their adversaries to lay down their arms and make sure the civilian population has left the area before they begin their campaign.

Now this, nobody in NATO has referred to neither have the western media outlets NATO uses.

In conclusion, this is not about Libya or Colonel Gaddafy. It is about NATO having painted itself into a corner because the French had vested interests in North Africa and Britain's David Cameron, unpopular at home, was dying to have a war for himself. After all, he is from a country where the last five Prime Ministers have been involved in six wars. This was also a cynical manipulation from William Hague, the beleaguered Foreign Secretary who like Bill Clinton (Monica Lewinsky/Serbia) perhaps needed some external focal point of interest to take the prying public eye away from his own private life.

Frustrated with the fact that they now see how genuinely popular al-Qathafi is, knowing they jumped the gun and sided with terrorists in an internal struggle, NATO now tries to wrong the rights by recognising the wrong side and increases its savage attacks. This time however the hearts and minds of the international community are aware, are engaged and this outrage will not go unpunished.

NATO will pay for this, and will pay dearly, as will its leaders. This will not be forgotten neither will those of us who dreamed about an international community ruled on the basis of respect for the law and not the greed of lobbies. The cynical manipulation of public opinion through peddling concepts of fear and insecurity through the lie-mongering corporate media has come to an end. This is NATO's last stand.

Let this campaign be NATO's last. Let the people of the world make their voice felt through protest against this evil organization and make them pay by voting with their feet, or in this case, wallets. As a punishment for their crimes in Libya, the international community should avoid buying products or services from the member states party to this outrage:

Those liable for trial for war crimes for being party to acts of murder, attempted murder, siding with terrorists in an internal conflict, taking part in a campaign based upon false information (making the Resolutions 1970 and 1973 void), criminal damage, war crimes and crimes against humanity: